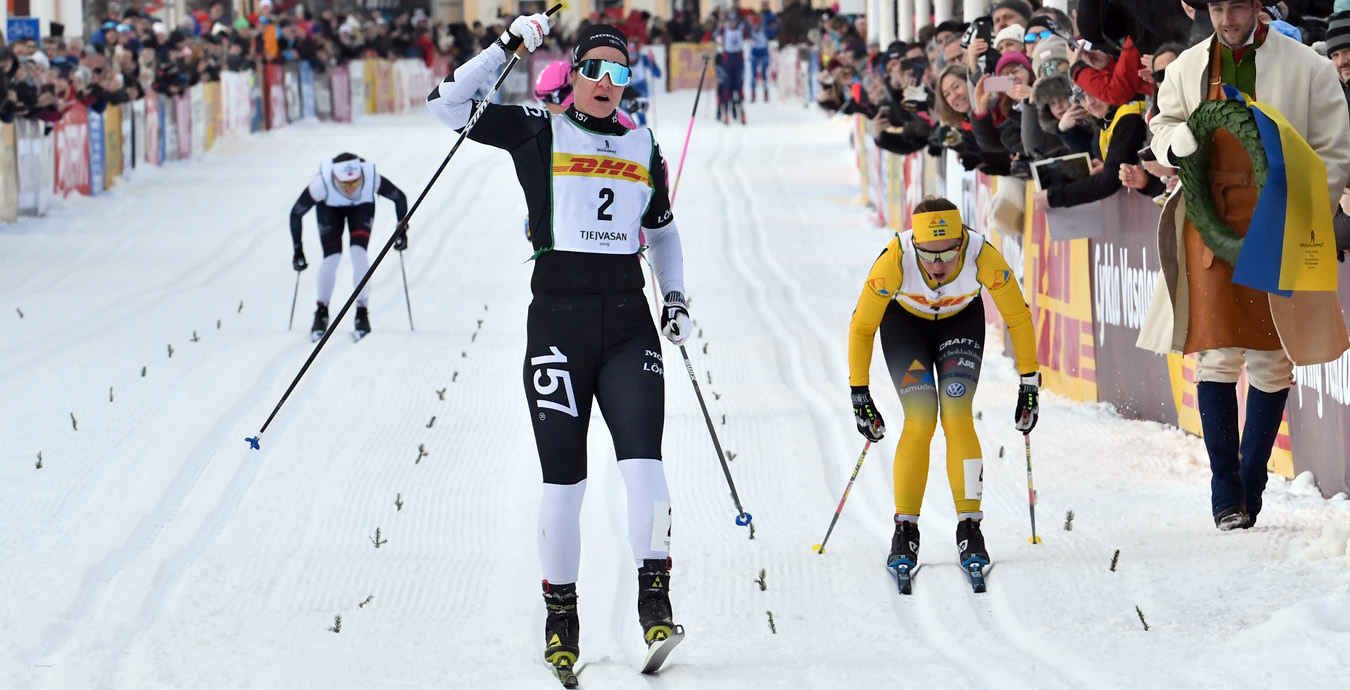 Britta Johansson Norgren, Sollefteå Skidor IF, won the 31st Tjejvasan one second ahead of Lina Korsgren, Åre Längdskidklubb, and four seconds ahead of Katerina Smutná, the Czech Republic.
"I felt it had paid off when I pushed during the race. I had a great amount of energy," says Britta after her third Tjejvasan victory.

The quartet of Johansson Norgren, Korsgren, Smutná and Laila Kveli were strongest throughout the race. Britta increased the speed several times to feel out her competitors, and it was only the trio that could fully keep up.

The leading group shifted between four and eleven skiers again and again. Going into the Hemus terrain, with five kilometres left, there were eleven skiers in the group. Laila Kveli was in front, heading down one of the steeper inclines when she lost her balance and fell. Others in the group just narrowly avoided getting pulled down too.

Disappointing for Kveli, though she bounced back quickly and was able to catch up before the final stretch, coming in at fifth place.

Johansson Norgren led the way onto the final stretch on Vasagatan in Mora. Lina Korsgren was second, in a good position, but Britta turned out to be strongest on the long finishing stretch.
”I felt it had paid off when I pushed during the race. I had a great amount of energy. My muscles still felt strong and I’d gotten a good amount of fluid in me,” Britta explains.

You pushed hard several times and then slowed the pace; you must have noticed that many couldn’t keep up!
”Yes, every time I pushed ahead there were only three with me: Lina, Smutnà and Laila. But none of them were particularly interested in keeping that fast pace. They might have been planning for the final spurt, trying to save as much strength as possible.”

”The last five kilometres I was really excited because of this. I thought okay, I’ll take that spurt. I was ready for a final spurt but still wanted to keep a high speed so it would cost them.”

”I may have pushed a bit early and given Lina a very good line towards the finish. But I figured even then I could show that I had more to give. When she came up early I could respond.”

Lina Korsgren comments the finish:
”I was going to keep cool as long as possible before challenging. When I went all out it felt like my body didn’t respond quite as I’d hoped. But I’m satisfied with second place.”

Katerina Smutná was also happy with her results even if she couldn’t defend her victory from last year. Emma Wikén came in as fourth just ahead of Laila Kveli in fifth place.

It was impressive to see Kveli come back despite a fall so close to the finish.
”I thought ‘oh dammit’ when I ended up on the ground. I’m glad I didn’t pull anyone else down. The fall was my own fault,” says Kveli, continuing:
”I had to work hard to catch up since Britta went fast shortly after that. It felt like a good day up until the fall but also afterwards, since I could catch up. But then I had to pay for it on the final stretch.”

Overall Britta pushed hard directly from the start and already at the Oxberg checkpoint there were nine skiers in a leading group, separated from the rest.

Lina Korsgren was first to Hökberg, taking the spurt prize narrowly ahead of Britta Johansson Norgren, Katerina Smutná, Laila Kveli, Elin Mohlin and Frida Erkers, all passing within five seconds. At the Eldris checkpoint there were eleven skiers again, all within ten seconds. These eleven were all part of the leading group down to Mora Parken before the battle on the final stretch. 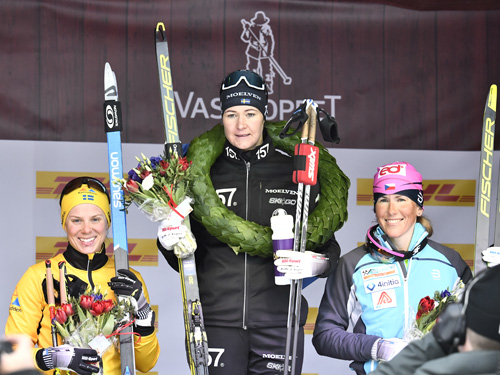 Watch SVT’s live broadcast after the fact on SVT Play >

See the spurt finish and interviews with the elite >

Places still available in Vasaloppet’s Winter Week 2019
There are still start places available except in the two fully-booked races: Blåbärsloppet and Vasaloppet. You can register directly on location. Read more under ”Direct registration” at vasaloppet.se

Register for Tjejvasan 2020
Want to ski Tjejvasan 499 years after Gustav Vasa’s adventure in Dalarna? Registration for Tjejvasan 2020 open on Sunday, March 17 at 09:00 on vasaloppet.se. The race runs on Saturday, February 22, 2020.

Earlier
64 nations and more statistics for Vasaloppet's Winter Week 2019
Next
Facts, statistics, news and trivia for the 95th Vasaloppet