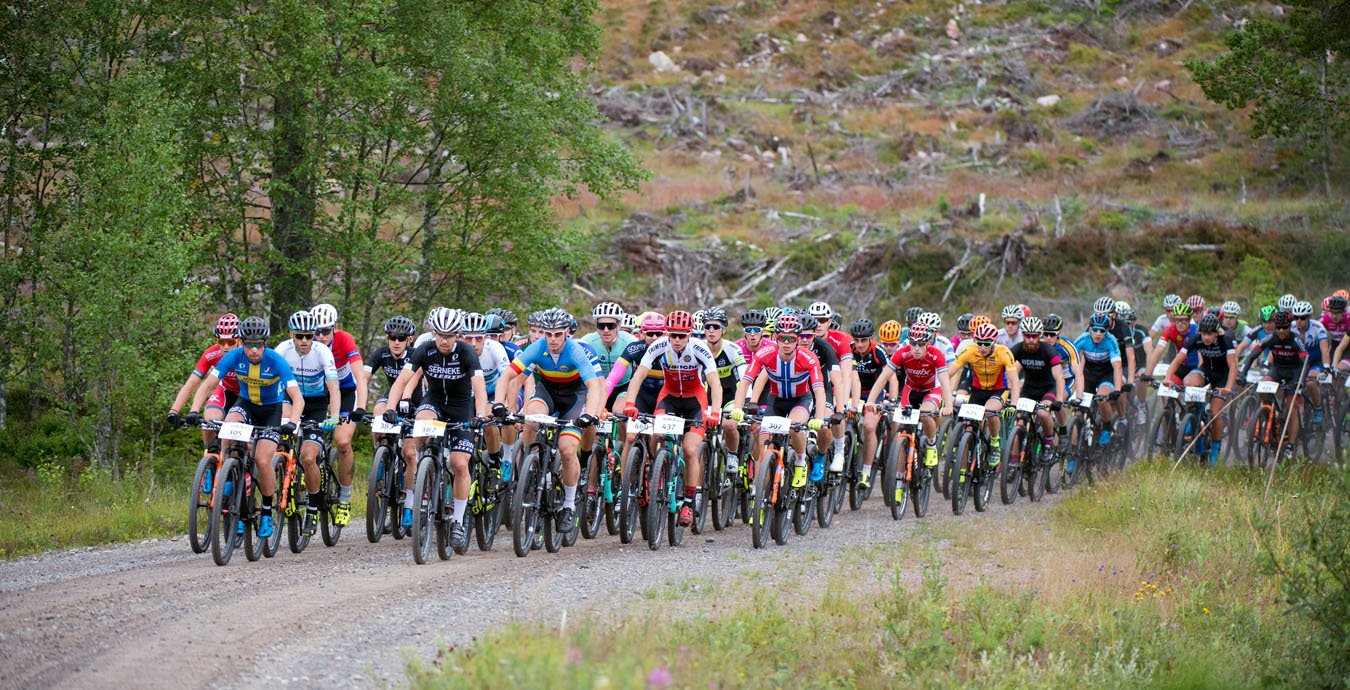 Vasaloppet's Summer Week and Cykelvasan take place in 2018 for the tenth year in a row. Since the start in 2009 a total of over 111,100 participants have biked across the finish line in Cykelvasan's first nine years. So far over 24,000 cyclists are registered for 2018. The main race, Cykelvasan 90 on Saturday, is fully booked but there are start places available in all other races for those itching for a thrilling bike ride. Here we have collected news, facts, statistics and information about Cykelvasan, the biggest Nordic mountain bike race.

Every year since the start in 2009 Cykelvasan has set a new registration record, and this year is no different! The current total for all Cykelvasan 2018 races is 24,001 registered participants. Cykelvasan 90 is fully booked with 13,000 registrants but the race showing the most growth is Cykelvasan Öppet Spår, going from 2,733 registered in its first year, 2015, to well over 6,000 registered this year.

There are still places available in the Friday and Sunday races. Direct registration for these races can be completed online up until Wednesday and on location from Thursday and on.

Cykelvasasprinten – open qualifier for the public and a ”dress rehearsal” for the elite
Cykelvasasprinten is an exhibition race for especially invited elite cyclists in Lindvallen, Sälen, where a crowd-friendly, fun and technical track is built in the lower sections of the Lindvallen ski slope near the Ski Lodge. New for this year, the open qualifier for the public is held using Strava. Each participant will make a profile on strava.com and, using the app, they can bike the qualifying lap as many times as they wish.

– Open qualifier for Cykelvasasprinten, on the Cykelvasan stage in Lindvallen, is held on August 6–9, finishing on Thursday, August 9 at 18:00–19:00. Just bring your bike and helmet and you can compete in the qualifier. No pre-registration is required and no participation fee. You bike a lap around the sprint track and the three fastest ladies and gentlemen go on to challenge our invited elite cyclists in Cykelvasasprinten on Friday. Great prizes will be raffled among all participants.

– Cykelvasasprinten, the Cykelvasan stage in Lindvallen, Friday, August 10 at 14.45–16.00. Invited elite cyclists will compete for victory in Cykelvasasprinten 2018. Here they can get a feel for one another before the score is settled in Saturday’s Cykelvasan 90. The women’s and men’s classes consist of 12 and 18 cyclists, respectively. Prize money is awarded to the victor in each class. Each race consists of two laps. Come and cheer!

Barnens Vasalopp Cykel
Apart from the above mentioned races there will also be a Barnens Vasalopp bike race for the very youngest, up to about 10 years of age: In Sälen on Friday, August 10, and in Mora on Saturday, August 11. All participants will bike a short stretch, wear a number bib, and receive a diploma and medal.

Cykelvasan 90 Favourites 2018
The mountain bike season is in an intensely competitive stage. This weekend saw both the Swedish Marathon Championship, Grenserittet in Halden and Finnmarksturen in Ludvika and today, Tuesday August 7, the European Championship runs in Glasgow.

Emil Lindgren has, with seven starts in Cykelvasan, never placed lower than sixth, but he’s not yet won it either. Before this year’s race Emil won the Swedish XCO Championship and this past weekend he won both the Swedish Marathon Championship in Motala (80 km) and Finnmarksturen (68 km). With two races to go Emil has already secured his victory in the Swedish Långloppscupen cup, since only the top six results out of nine competitions are counted. Emil has so far won five of the seven cup races and placed second in one!

Michael Olsson won the two races in Långloppscupen not claimed by Emil Lindgren. Moreover there are four cyclists from Serneke Allebike MTB Team taking the lead in Långloppscupen: Lindgren in first place, Dennis Wahlqvist in second, Jonas Norén in third and Olsson in fourth. Lindgren, Olsson and Wahlqvist also took the top three positions in the Swedish Championship this past Saturday.

Michael Olsson and Matthias Wengelin (who won the first Cykelvasan in 2009) are competing in the European Championship in Scotland. Wengelin has had a difficult season with injuries and illness.

Previous Cykelvasan victors such as Alexander Wetterhall and Johan Landström also loom on the starting list. Or will it be a Norwegian victory for the first time in Cykelvasan?

Jennie Stenerhag, who is something of a Cykelvasan queen with her four wins, had a serious injury this year but has made a comeback and won Mörksuggejakten. This past Saturday she took her sixth straight Swedish Championship marathon gold medal. Who could stop her?

Taking the lead in Långloppscupen after seven races is Maria Karlberg who won Finnmarksturen this past Sunday. Second is Emmy Thelberg who also came third in the Swedish Championship this past Saturday after Jennie Stenerhag and Sandra Salinger.

From Norway the biggest threat against Swedish victory are Hildegunn Gjertrud Hovdenak, winner of Cykelvasan 2014 (and fourth in 2017) and Gunn-Rita Dahle Flesjå, Olympic gold medallist in Athens 2004, participating in her first Cykelvasan this year.
Start lists

Bike Safe 2018
The Vasaloppet organization has been working hard for years on the ”Bike Safe” project, Vasaloppet’s initiative for safer biking during Cykelvasan. Vasaloppet wants all participants to feel safe and secure on their journey down to the finish in Mora.

For those participating in Cykelvasan 2018 it is important to keep track of signs and markings. There are also educational films to view. Read more and view the films at:
www.vasaloppet.se/lopp/cykellopp/cykelvasan90/traning-och-kost/vasaloppsskolan

You can also view completely new cycling videos at www.vasaloppet.tv

At the start places in Sälen and Oxberg, it is, in connection with Cykelvasan, possible to go over your bike and equipment in special quick controls.

Time penalty for littering
Vasaloppet has been an eco-labelled event since 2006. Since the Winter Week 2017 Vasaloppet has applied a time penalty of 15 minutes in the event that a participant is found to have littered in the track or in nature. This rule will also apply during the Vasaloppet Summer Week 2018 races. A number of officials will be assigned along the course. Photographic evidence is required to apply the time penalty to a participant.

Disposing of litter will be allowed in three different ways during Vasaloppet’s Summer Week. If you are seen disposing of litter in other ways you will be penalized with a time penalty of 15 minutes. You may dispose of litter:
– In the bins at the Vasaloppet checkpoints
– In the marked littering zones between each Vasaloppet checkpoint
– Where you as a participant know that a team leader or associate will pick up what you throw

Cykelvasan’s five 2018 races have participants from 45 different nations, including Sweden. A new record! The five biggest nations (excluding Sweden) are Norway, Denmark, Finland, Germany and Great Britain. About 800 Norwegian participants are registered. Participants in Cykelvasan 2017 range between ages 8 and 90! (County and national information is from August 3, 2018.)

Previous winners
14 different cyclists have taken home the 18 victory garlands in Cykelvasan since the start in 2009. Jennie Stenerhag has won four times and Jesper Dahlström twice. Most top three placements in the men’s class is split between Magnus Darvell, Matthias Wengelin and Emil Lindgren, each with three top three placements, and in the women’s class it’s split between Hanna Bergman and Jennie Stenerhag, who have each been in the top three five times. In the men’s class there have only been Swedish victories, while the women’s class has seen two international winners (one Finnish and one Norwegian).

Cykelvasan’s development over ten years
2009: The first ever Cykelvasan 30, Cykelvasan 45 and Cykelvasan 90. The terms ”Vasaloppet Winter Week” and ”Vasaloppet Summer Week” are coined. With near 2,000 participants, Cykelvasan immediately becomes Sweden’s biggest mountain bike race.
2010: Cykelvasasprinten ran for the first time in Lindvallen. Barnens Vasalopp on bike (originally called Barnens Cykelvasa) for young children has also been arranged since 2010.
2011: The start in Sälen moves from Tjärnhedens IP to the Vasaloppet start in Berga by.
2012: Ungdomscykelvasan starts, a competition for youths aged 11–16 (run on the same course as Cykelvasan 30).
2015: Cykelvasan Öppet Spår is introduced, based on the winter version of Öppet Spår.
2018: Cykelvasan is arranged for the tenth year in a row.

Nine races in a row
136 people have completed the main race Cykelvasan 90 all nine years 2009-2017. 126 people are registered to participate in Cykelvasan 90 for the tenth time!

In order to continue the race, participants must arrive at the checkpoint in Evertsberg before 16:45 and in Hökberg before 18:45. Checkpoints must be left within 10 minutes after each closing time.

Swedish Television broadcasts
SVT continues their tradition of showing a 45 minute summary of Cykelvasan 90. The summary will be broadcast on SVT1 and SVT Play on Sunday, August 12 at 18:15–19:00. Host/reporter: Björn Becksmo. The programme can be viewed on SVT Play for the next six months. It can only be viewed in Sweden.
www.svt.se/sport

During Cykelvasan 90 on Saturday, Vasaloppet.TV will, among other things, follow the leading group with live cameras on two electric bikes. There will also be features from the start, along the track and, of course, the finish line in Mora. You can also see all the starts and finishes in all races live at Vasaloppet.tv.
www.vasaloppet.tv

Preem greeting
This year Vasaloppet, in collaboration with main sponsor Preem, will, for the first time, offer all participants in the finish area the opportunity to record a greeting to their loved ones directly to Vasaloppet.tv.

Follow participants
Live results will, as usual, be available at vasaloppet.se. It is also possible to follow specific participants via text message and in the updated free app ”Vasaloppet Sommar”. Read more:
www.vasaloppet.se/en/races/bike-races/cykelvasan90/follow-participants

Blueberry soup
The total consumption during Vasaloppet’s Summer Week is expected to be about: 10,000 litres of Ekströms blueberry soup, 13,500 litres Enervit sports drink, 17,000 bananas and 500 kg of pickles.

3 x 90 km or 3 x 45 km
2014 was the first calendar year it was possible to complete ”Vasaloppstrippeln” in its entirety, that is completing Vasaloppet/Öppet Spår (skis), Cykelvasan 90/Cykelvasan Öppet Spår (bike) and Ultravasan 90 (running). Interest has increased every year. In 2017 there were over 121 people who managed the achievement and in 2018 there are currently 221 people planning to take on the 90 km on skis, bike and foot. Cycling makes up the second part of Vasaloppstrippeln. From this year it’s also possible to complete Vasaloppstrippeln 45 (Halvvasan, Cykelvasan 45 and Ultravasan 45).

Events
There is a lot happening in Sälen and Mora during Vasaloppet’s Summer Week 2018. Take part in the whole programme:
www.vasaloppet.se/en/programme/calendar

Register for the eleventh Cykelvasan in 2019
Registration opens on Sunday, September 16, 2018, at 09:00 on vasaloppet.se

Vasaloppet is the world’s biggest cross-country ski race. Vasaloppet’s Winter Week with its cross-country skiing and Summer Week with mountain biking and running attract a total of almost 100,000 registered participants every year. Since the beginning in 1922 over 1.4 million participants have passed the finish line portal in Mora. Vasaloppet is a non-profit making organization owned by IFK Mora and Sälens IF. An engine for public health and sports club activities, in forefathers’ tracks for future victories!