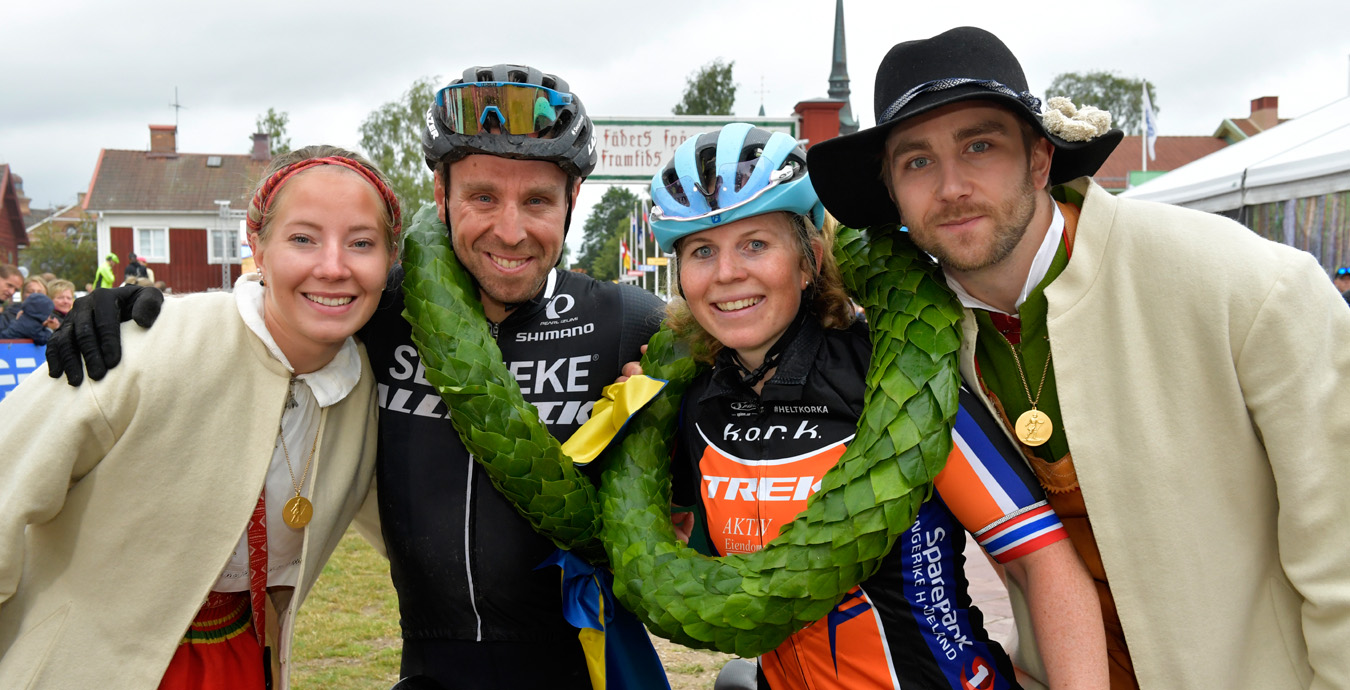 Emil Lindgren, Serneke Allebike MTB TEAM, and Elisabeth Sveum, Norway, won the eleventh Cykelvasan this Saturday. Both cyclists snatched their victories on the final stretch in Mora.
"It feels insanely good. I've tried and tried so many times. Finally I got it," says 34-year old Säter local Emil Lindgren after being first across the finish line.

Cykelvasan is the biggest Nordic mountain bike race, first held in 2009. This year there are over 24,000 registered participants, of which 13,000 were in Saturday’s main race Cykelvasan 90 between Sälen and Mora.

Emil Lindgren has long sought victory in Cykelvasan. Lindgren has a successful career with many Swedish Championship golds and international achievements over 16 years of pro cycling. But he hadn’t taken a Cykelvasan win until today! His previous best was second place in 2010. Participating eight times before today he’d never placed lower than sixth.

Describe what made your win today possible?
”I kept my cool and didn’t work too hard today. Otherwise I’m usually at the front, pushing,” says Emil.

There were nice conditions along the whole track with no rain. The headwind, however, was a factor to consider.
”Maybe the headwind was a good thing today. I hid as much as I could and did what I had to, but not much more.”

Emil had great help from last year’s winner and teammate Michael Olsson, not least towards the end.
”Micke helped me a great deal. Especailly on the last kilometres when he did all the work, keeping the speed up all the way to the final curve. He pushed himself one hundred percent. It was amazing.”

When did you feel that you’d won?
”Only a metre before the finish line.”

What does this victory mean to you?
”So much! I can check this final achievement off my list. I’m so happy.”

Matthias Wengelin, Länna sport CK, won ten years ago and was so close to a second victory but crossed the finish line a wheel’s length behind Lindgren.
”I came close to another win. Sure, winning again ten years after would have been nice. But a second place is good too. I did what I could,” says Matthias Wengelin.

What did you make of the race today?
”It was very slow and cautious with a big group. You had to stay near the front to avoid hassle.”

Erik Mattelin, Highland Cycling, added some colour to the race when he shot ahead just before Hökberg.
”There was a lot of cautious cycling so I thought I would go for the spurt prize in Hökberg. I pushed a little too early but I got a decent gap and I kept grinding, thinking they’d catch up soon enough. But they never came and with 14 kilometres left I decided to go for it; even though, with the headwind, I knew I wouldn’t quite make it. My hope was that there would be some disorder in the group behind me.”

What were your thoughts, leading the race alone?
”To be honest it was hell. You’re at your limit and you know there’s another half hour left,” says Mattelin, who was caught up to right before Eldris and crossed the finish line in 23rd place, three seconds after Emil Lindgren.

Ladies elite
The women’s competition, starting 45 minutes ahead of the men, finished right before the men thundered across the finish line and there too we saw a spurt finish. Not with 30 cyclists like in the men’s class, but with five. It was the first time in Cykelvasan’s history that as many as five ladies came up the final stretch together.

These five stuck together all the way to the finish where the two Norwegians crossed the finish line first, Sveum ahead of Hovdenak. Everything fell into place for Elisabeth Sveum who came in 17th place in her first Cykelvasan last year.
”The speed picked up across the Aukland bridge but no one came up. Then I timed the spurt perfectly. Winning Cykelvasan is huge,” says Sveum.

Hovdenak, in second place, was somewhat disappointed that she couldn’t defend her victory from last year.
”Elisabeth is good at conserving her energy so I thought she could start the spurt. She’d been towards the back for a long time, saving up. She was at the front at the end but we were so slow then that it didn’t cost her. Sadly neither me nor Jennie could take her on in the spurt,” says Hovdenak, continuing:
”I don’t want to talk her down but it doesn’t feel great when she was laying in wait for so long. But it’s allowed.”

Jennie Stenerhag, in third place, looked strong along the track and took many spurt prizes but it wasn’t enough to get her a fifth Cykelvasan 90 victory in the end.
”We had such an incredible headwind the whole way so I knew a long spurt would be risky. I wanted to go for it for a long time but I didn’t have that extra kick in my legs today. It was hard. It unfortunately wasn’t enough today,” says Stenerhag.

Cykelvasan continues this Sunday with the Ungdomscykelvasan competition (with a new record number of registrants) as well as the leisure races Cykelvasan 30 and Cykelvasan 45 – all starting in Oxberg. Want to participate? Registration is possible all the way up until the start!

CYKELVASAN 2020
Registration for Cykelvasan 2020 and Vasaloppet’s Summer Week 2020 opens on Sunday, September 15, 2019 on Vasaloppet’s website! Want a reminder when registration is about about to open? Sign up for an email notification now at  www.vasaloppet.se

NOTE! See  all results at
results.vasaloppet.se/2019/?lang=EN_CAP

There is a lot happening in Sälen and Mora during Vasaloppet’s Summer Week 2019
Take part in the whole programme:
vasaloppet.se/en/programme/calendar

Earlier
Cykelvasan 2019 – the biggest Nordic mountain bike race with over 23,000 cyclists
Next
Jim Walmsley in Ultravasan 90: “I have a good chance running for a win”