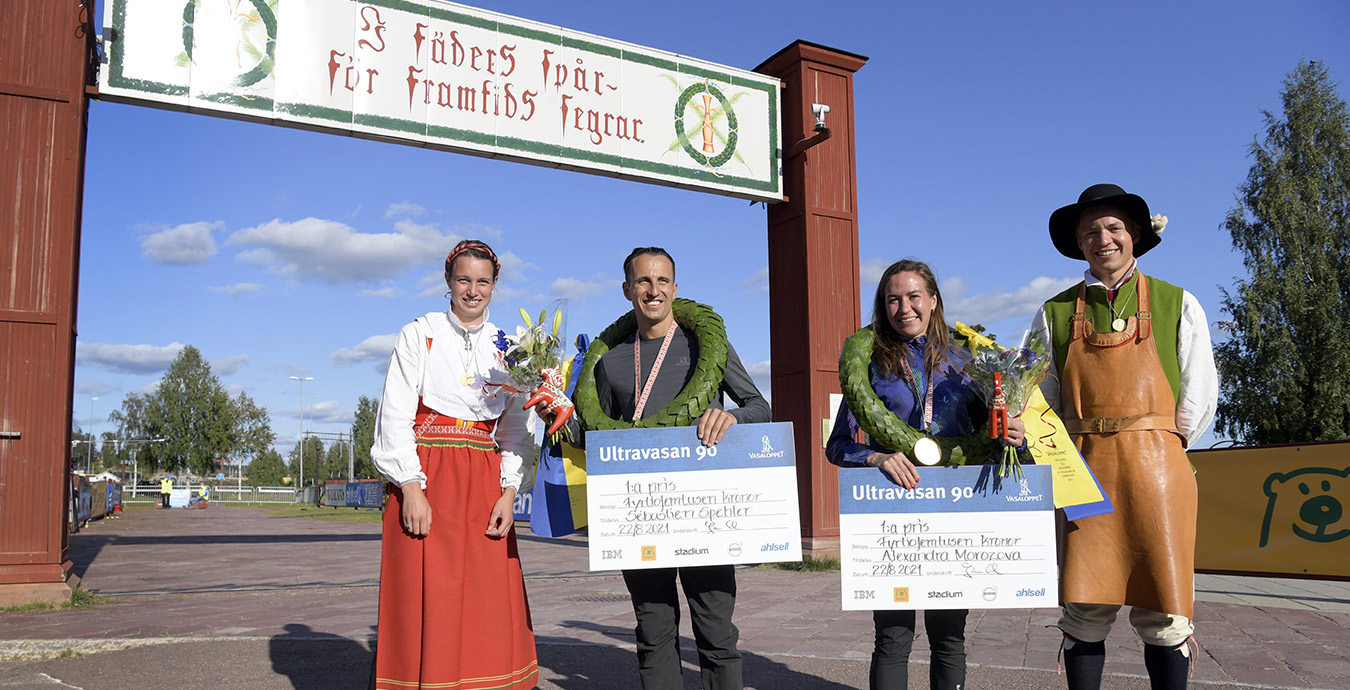 Finally, this past weekend, ultrarunning competitions returned to the Vasaloppet Arena after a year break. The winners of Ultravasan 90 Elit were Sébastien Spehler from France in the men's class and Alexandra Morozova from Russia for the women. The Russian runner thereby became the first person in Ultravasan history to win the race three times. In Ultravasan 45 Elit there were two Swedish winners; Kristofer Låås and Liselotte Hellsten. Registration for Vasaloppet's Summer Week 2022 opens on Sunday, September 26, 2021.

The runners got to sleep in because the classic start in Sälen took place at 09:00 on Sunday morning at Tjärnheden’s IP instead of the ultra-early 05.00. With clear blue skies and a few degrees plus Celsius at the start, the day was promising. Beautiful weather accompanied the runners all the way to the finish.

26 elite men and 15 elite ladies started in Sälen. The pace of the leading group made it clear, from the very start, that these were elite runners of the highest international caliber.

Ultravasan 90 Elit Men
Vive la France! Frenchman Sébastien Spehler took the lead before the first Vasaloppet checkpoint in Smågan. His lead, then, was almost a full minute. When claiming the first sprint prize in Mångsbodarna, Spehler had, with his light and easy running steps, extended his lead to two minutes. It soon became clear that the other participants in the race were competing to come second and third.

At Risberg Spehler added another minute – then followed by Fredrik Eriksson, Mikael Ekvall, American David Laney, Viktor Stenqvist and Jonas Buud, all together in a group.

Of course, the French mountain runner Spehler took the Mountain Prize in Evertsberg with just over half the race gone. A duo consisting of Viktor Stenqvist and David Laney passed next, five minutes later. But in Oxberg David Laney dropped to third place with Viktor ahead and in Hökberg he lost the third place to Josef Hamber. The groups broke apart and the field spread out.

Sébastien Spehler ran unchallenged towards France’s first victory in Ultravasan – there was never any doubt. His victory run took 6.09.45 with a margin of 13 minutes to the next man.

David Laney, who was falling behind in Hökberg, was only eleven seconds after second-place Viktor Stenqvist in Eldris. But Viktor pulled ahead once more and got second place, beating Laney to the finish by exactly one minute.

The top trio were all participating in Ultravasan for the first time. Sébastien Spehler had his eye on Ultravasan for several years; it’s less hilly than the races he usually runs in France and he thought it might suit him well. This year he had the opportunity to participate and came to Sweden. He turned out to like Sweden and called the Sälen-Mora region simply ”magnificent”.

“I was on my own early in the race and a little surprised, I haven’t heard many times off the other runners,” said the winner Sébastien Spehler. “But it went very well, I was able to follow my time planning and I’m very happy with the race.”

Ultravasan 90 Elit Women
From the very beginning, the two favourites Dominika Stelmach from Poland and reigning champion Alexandra Morozova from Russia showed that one of them would be taking it home. They accompanied each other from the start but before the first sprint prize in Mångsbodarna, Alexandra picked up the pace and when leaving the checkpoint she had a lead of 20 seconds. A few kilometres later, Dominika caught up and was first in the track again. They continued to test each other and it was clear that they might improve the course record. Third was Sofia Smedman, this year’s 100 km Swedish Champion who had a long way to the leading pair.

In Evertsberg, Alexandra Morozova took the Hill Prize, 28 seconds ahead of Dominika Stelmach. The margin was about the same in Oxberg but the Russian, who before the race had mentioned that she would run faster in the second half of the race, stuck to that exact tactic: In Hökberg, her lead was almost five minutes!

Alexandra Morozova won the race with the time 6.48.36 and became the first runner in Ultravasan history to take three victories – and she took all three in a row! However, she did not break her own course record, which is five minutes faster than her 2021 time.

“The tactic was to stick with Dominika and not let her go,” Alexandra Morozova explained after the race. “I had planned to win the sprint prizes and then slow down, recover and go for the win. It has been important to win a third time. I like Ultravasan and Sweden so there is a good chance that I will come back again.”

Dominika Stelbach took second place while home turf runner Malin Barrulf, who in fourth for most of the race, advanced and finished third in her Ultravasan debut.

Kristofer Låås, who came fifth at that marathon Swedish Championships last year, quickly “closed the match” and was fastest through all three checkpoints, winning with a time of 2.41.04; two and a half minutes ahead of second place Klas Johansson. Joacim Lantz came third.

”I tried to go for the track record but I got tired at the end,” said Kristofer Låås immediately after the finish. ”I didn’t dare to go too hard at first. I have met Klas before and he’s a strong finisher so I was a bit worried, and I had no idea how big my lead actually was.”

The course record of 2.39.33 survived but Kristofer Låås hopes to come back and beat it.

Ultravasan 45 Elit Women
Experienced Sophia Sundberg was first to the checkpoint in Oxberg but Liselotte Hellsten caught up and led the way in Hökberg. Sophia then had to let Liselotte push ahead and she won by about three minutes with a time of 3.05.38

Liselotte Hellsten was seventh at the marathon Swedish Championships in 2020 where she set a new personal best by twelve minutes. She’s now beaten her previous best Ultravasan 45 time from 2018 by a full 28 minutes. Only Lisa Ring has won the race with a faster time.

”It’s a bit hard to grasp, I’ve had a hard summer but I’m so happy and relieved now,” said an emotional Liselotte Hellsten with the victory wreath around her neck. ”I wanted to unleash and that’s what happened. The plan was to take it easy and push in a controlled manner; I think I succeeded with that and it felt very good. There was no planned push in Hökberg but I managed to keep a comfortable pace the whole way. I really love this event.”

Watch the eight-hour long TV broadcast after the fact
vasaloppet.tv >

Statistics: All top ten placements in Ultravasan 90 and 45 over the years (PDF)
pdf >

Vasaloppstrippeln – ski, bike and run all in one year

Vasaloppstrippeln is a challenge where you complete three races – skiing, cycling and running – during one calendar year. Choose between 90, 45 and 30 kilometre. READ MORE>

Earlier
Swedish and international elite runners settle the score in Ultravasan on Sunday – follow along at Vasaloppet.TV
Next
Hemmavasan 2021 in Sweden and worldwide