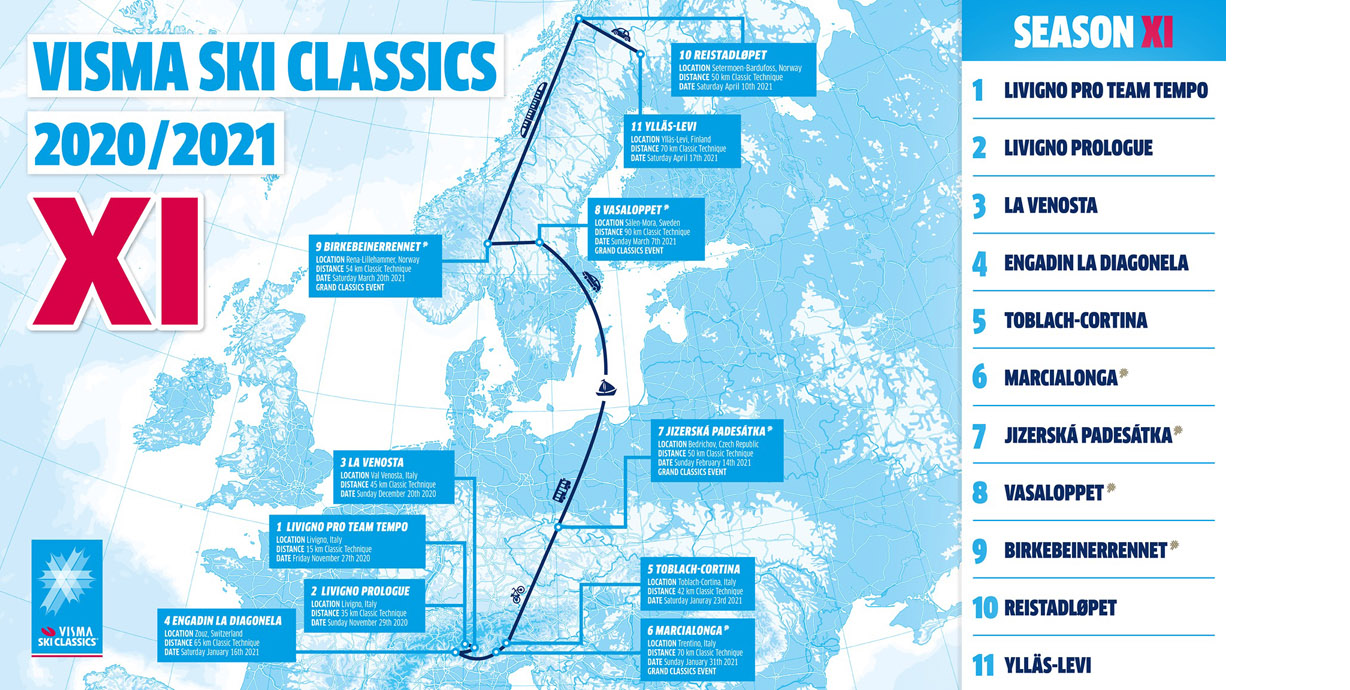 The 11th edition of Visma Ski Classics Pro Tour, Season XI, includes 11 events with a total of 586 km. It starts with the Prologue weekend in Livigno with a 15 km Pro Team Tempo 15 km on November 27th, 2020, and ends in Northern Finland when the 70-kilometer final Ylläs-Levi takes place on April 17th, 2021, a winter tour around Europe.

After Livigno, the second edition of La Venosta takes place on Sunday December 20th. This coming winter the recreational skiers will have a Challenger event the day before. Then after the holiday period, the Pro Tour continues in Switzerland with La Diagonela January 16th, Toblach-Cortina January 23rd, and Marcialonga January 31st, last two both in Italy. On February 14th, the Pro Tour moves to the Czech Republic for Jizerska Padesatka before moving north towards Scandinavia for Vasaloppet on March 7th in Sweden and Birkebeinerrennet on March 20th in Norway. The last two events will take place after the Easter holiday, offering the best time of skiing in Northern Scandinavia, with Reistadløpet, Norway April 10th and the Season XI Final  Ylläs-Levi in Finland on April 17th.

“After last winter the feedback was that the Pro Tour was a bit too intense in January with 5 event weekends in a row. With the new Season XI calendar we have one less event, there is a free recovery-weekend between Marcialonga and Jizerska, making it better balanced. Season XI have 3 startup events in November/December and an intense January block before the four big events Marcialonga, Jizerska, Vasaloppet, and Birken. Then there is a short rest before finishing off the season with the two spectacular events north of the Arctic Circle. Even if the calendar of the Pro Tour is similar to last year we have exciting news to be within it, but we wait until after the summer to reveal them. Of course we are carefully monitoring the extraordinary situation at the moment, but hope and believe that when coming to the first weekend in December that the upcoming season can be held as planned. We are also preparing for different Plan B scenarios such as moving events geographically or in time”, says David Nilsson CEO Visma Ski Classics.