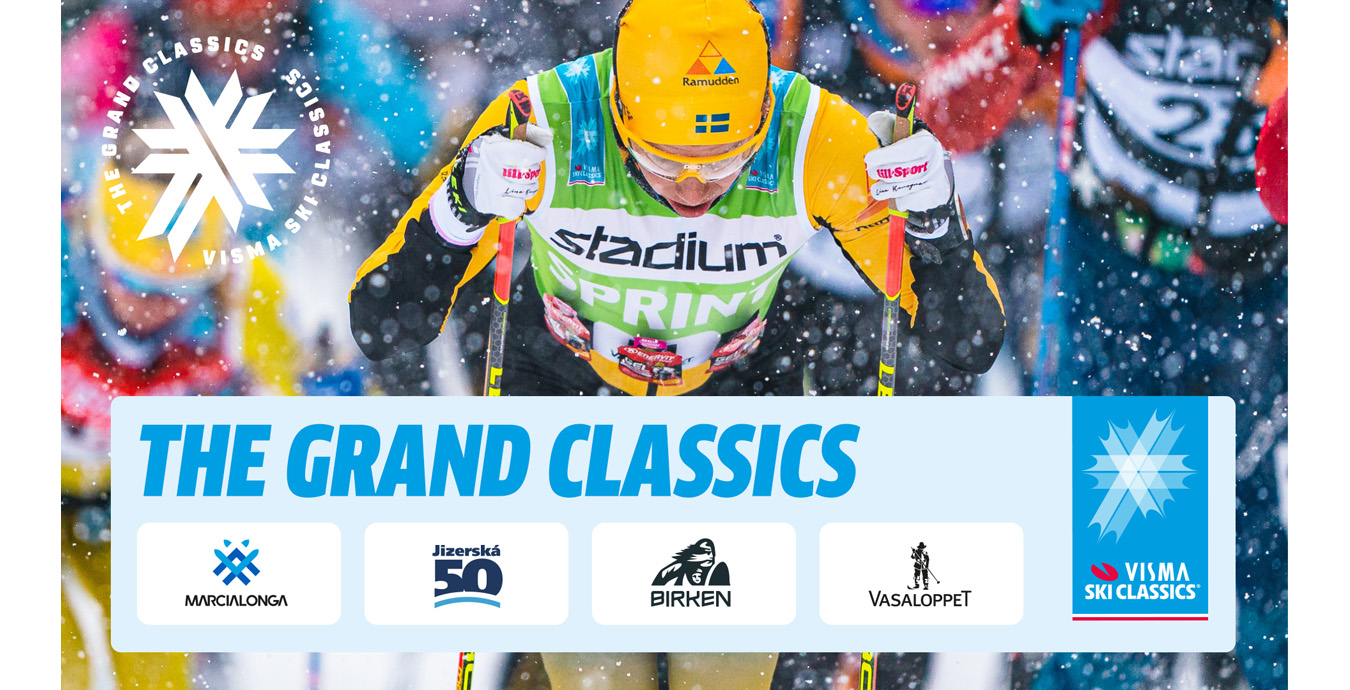 The long-distance skiing world championship, Visma Ski Classics, launches The Grand Classics Events. If an athlete wins all four in the same season he or she completes a Grand Slam. The Grand Classics events are the four largest and most prestigious events in the Pro Tour: Marcialonga, Jizerska Padesatka, Vasaloppet, and Birkenbeinerrennet.

No one has won all four races in the same year at any time before, completing a Grand Slam. Who will be the first?

The big 4 events follow one another in Season XI and will be very interesting novelty in the tour. Marcialonga in Italy is first out on January 31, and then follows Jizerska Padesatka in the Czech Republic on February 14, Vasaloppet in Sweden March 7 and Birkenbeinerrennet in Norway March 20.

”The Grand Classics events are part of the strategic sport development of Visma Ski Classics. When we locked the Pro Tour to 10-12 events, there will not be room for so many new events, so we will develop the sport within the Pro Tour. The four; Marcialonga, Jizerska, Vasaloppet, and Birken have always been part of our calendar and will be our monuments also in the future, ” says Visma Ski Classics CEO David Nilsson.

An interesting conclusion is that no athlete throughout history has managed to win all four events during the same season, completing a Grand Slam. Swedish Sven Åke Lundbäck in 1981 and Italian Cristina Paluselli 2005 and 2006 have been the closest so far winning three Grand Classics events in one season.  A curious fact is that. The Aukland brothers together won all four in 2013, two each, but of course, that doesn’t count…

It will now be great prestige to win all four events in the same season and be the first to complete a Grand Slam.

The races in the Grand Classics will have a higher value than the other events in the tour. There will be 300 points for the victories where the other events in the Pro Tour hands out 200 points, and there will also be a larger prize sum. The Grand Classics event will have a minimum of 30,000 euro in total prize money, Pro Tour events have a minimum of 20,000 euro.

The Grand Classics becomes the crown jewel during the Pro Tour season. Last year, Challengers were launched to broaden the sport and set a broader base, the four big ones now become a sharpening top of the Pro Tour and Visma Ski Classics.

”It will be a very good prize sum if you complete a Grand Slam, we release the size after the summer before the season starts…” David Nilsson continues.