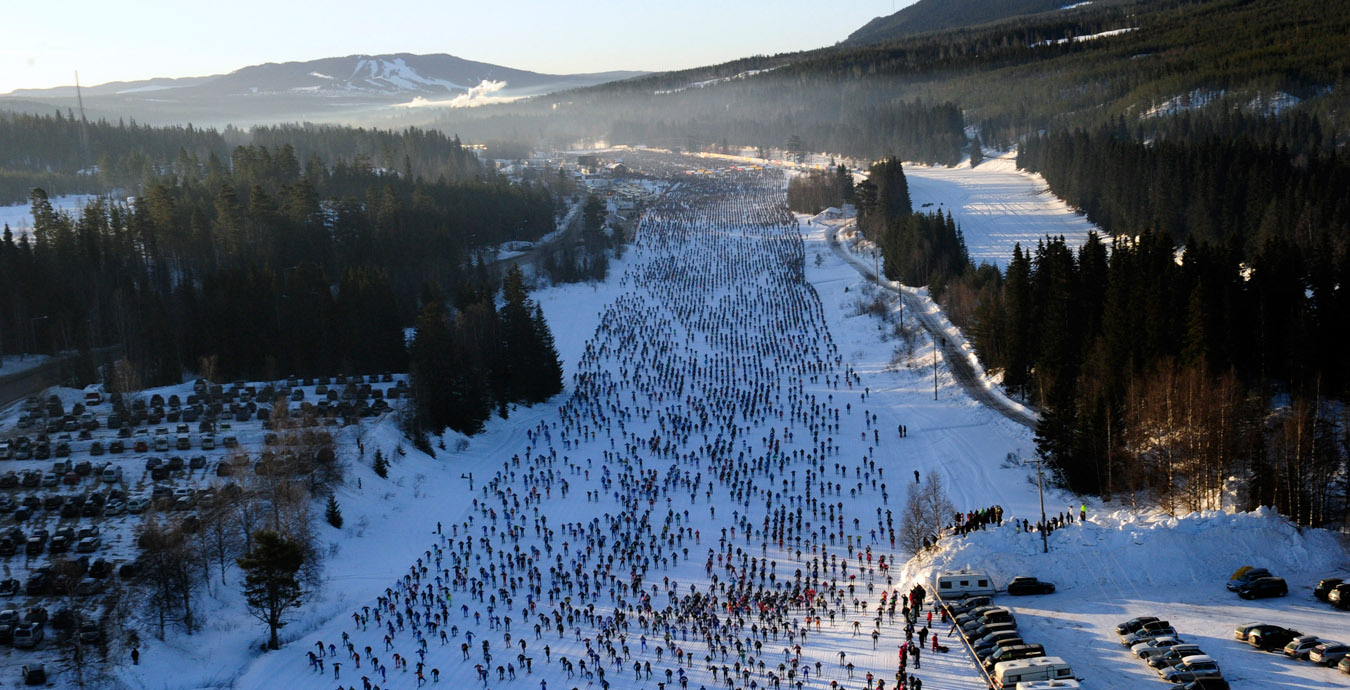 Facts, statistics and trivia for the 91st Vasaloppet

On Sunday March 8, 2015, at 08:00 CET, is the start in Sälen of the 91st Vasaloppet since the beginning in 1922. We have, as in previous years, gathered a wealth of facts and trivia for Sunday's Vasaloppet. For example: How many have registered, where do they come from, which former winners are participating, who are the favourites, which celebrities are participating, why do the number bibs have different colours, who has won the most times, and how much blueberry soup cooked?

– This is the 91st Vasaloppet. The first one was on Sunday March 19, 1922. (Three races have been cancelled, those in 1932, 1934 and 1990.) Vasaloppet is now 90 kilometres long. Since 1948 the race has always been run on the first Sunday of March but, due to the World Ski Championships in Falun, Vasaloppet will be run on the second Sunday of March this year.

– For the second year in a row, over 2000 ladies have registered for Vasaloppet, which means almost 15 percent female participants out on the course on Sunday. (In the whole of Vasaloppet’s Winter Week 2015, with all eight races included, 60 percent are gents and 40 percent are ladies.)

– The average age in Vasaloppet 2015 is 41.3 years. The youngest participants will turn 19 this year and the oldest will turn 89.

– In 2013 Jörgen Aukland became history’s first Vasaloppet winner to pole his way through the whole race without using grip wax. In 2014 Laila Kveli became the first lady to win without grip wax.

– Three-time Vasaloppet winner Oskar Svärd is going to try to improve his unofficial En Svensk Klassiker record of 13.56.17. He intends to add his result from Vasaloppet 2015 to his previous three races (Vätternrundan 2014, Vansbrosimningen 2014 and Lidingöloppet 2014) and register a better official time. (The four races must be completed consecutively, but not necessarily in the same calendar year.) Oskar’s time from Vasaloppet last year was 4.14.52. Besides this, Oskar has also been among Vasaloppet’s top ten gents an entire 14 times!

– Canadian Brian McKeever, with ten gold medals from the Paralympics, will participate in the race.

– Five skiers throughout history have won both an individual World Championship gold and won Vasaloppet: John Lindgren, Sven Utterström, Sixten Jernberg, Assar Rönnlund and Sven-Åke Lundbäck. But no one so far has won the World Championship and Vasaloppet in the same year.

– Since 1922 a total of 522,014 Vasaloppet skiers have completed the 90 kilometre Vasaloppet; put together they have covered a distance equivalent to 1,172 round the world trips or 61 journeys to the moon and back!

– The smallest margin between the ladies’ and men’s winners was in 2007 when Elin Ek was only 4 minutes and 49 seconds after the men’s winner Oskar Svärd. She was then the 92nd skier to finish.

– There are 55 men who have won the 90 races. Once there was a shared victory, in 1988, when Örjan and Anders Blomqvist skied together over the finish line with the Kranskulla Karin Värnlund in their arms!

– The first prize this year is raised for both the gents and ladies winners to 91,000 SEK. The winners also get a trophy, a garland and a kiss! The spurt prize winners in Evertsberg (The Hill Prize) each receive 10,000 SEK. Vasaloppet’s total prize sum for 2015 is over half a million SEK.

– Vasaloppet’s first live TV broadcast was in 1966. This year is the 38th time there is a live broadcast (in whole or in part) from Vasaloppet.

– Swedish Television (SVT) transmits their winter sports programme Vinterstudion from Mora over the weekend. Vasaloppet is broadcast live on SVT1, SVT World and on SVT Play 07:30–12:55 together with two parallel transmissions on the web. (”Rickard Olsson-cam” direct from the course, Mattias Svahn’s waxing hut, and all the participants’ finishes!)

– Live broadcast of Vasaloppet can also be seen for free over the whole world with English commentary from 07.45 CET at Swix Ski Classics Live Center www.swixskiclassics.com

– Vasaloppet 2015 is broadcast live on both Vasaloppet’s Radio www.vasaloppsradion.se and, of course, on Swedish Radio’s Program 4, Radiosporten. As it then was, Radiotjänst, the radio service, with Sven Jerring as reporter, broadcast from Vasaloppet for the very first time in 1925!

– Last year SVT’s five hour Vasaloppet broadcast was watched by an average of 2,200,000 viewers. The highest noted figure was 2,701,000 viewers – almost 30 percent of Sweden’s population – and it was SVT’s most watched sports program in 2014.

– Support along the course means a lot. It is possible to send a personal greeting at www.vasaloppshalsningen.se – completely free for anyone who wants to cheer along participants in Vasaloppet. Greetings are shown on big screens next to the track.

– All races run as part of Swix Ski Classics this January and February (Jizerská Padetsátka, La Diagonela, Marcialonga and König Ludwig Lauf) had to be shortened due to lack of snow.

– Swix Ski Classics has spurt prizes in Mångsbodarna and in Evertsberg.

– At Vasaloppet’s start field in Sälen there are 52 tracks in breadth. The start field’s collective track lengths are as long as the whole race itself. In total, in the Vasalopps Arena between Sälen and Mora, there are during the Winter Week 2,550 kilometres of ski tracks.

– Registration for Vasaloppet on March 6, 2016, and the other seven races in Vasaloppet’s Winter Week 2016, opens at vasaloppet.se on March 22, 2015 at 09:00. Participants who have completed three races (Vasaloppet or Öppet Spår) over the past six years (2010–2015) have priority and can register between March 16 and 19. This summer there is Vasaloppet’s Summer Week with CykelVasan (cycling), UltraVasan (running), and VasaStafetten (relay running race for 10 person teams) with, so far, over 18,000 registered participants.

– Vasaloppet’s operations annually generate about 15 million SEK for the regional sports club movement in Dalarna! There are also fees to the Swedish Ski Association and Swedish Cycling Federation that amount to about 3 million SEK every year (money which is then distributed to district associations all over Sweden).