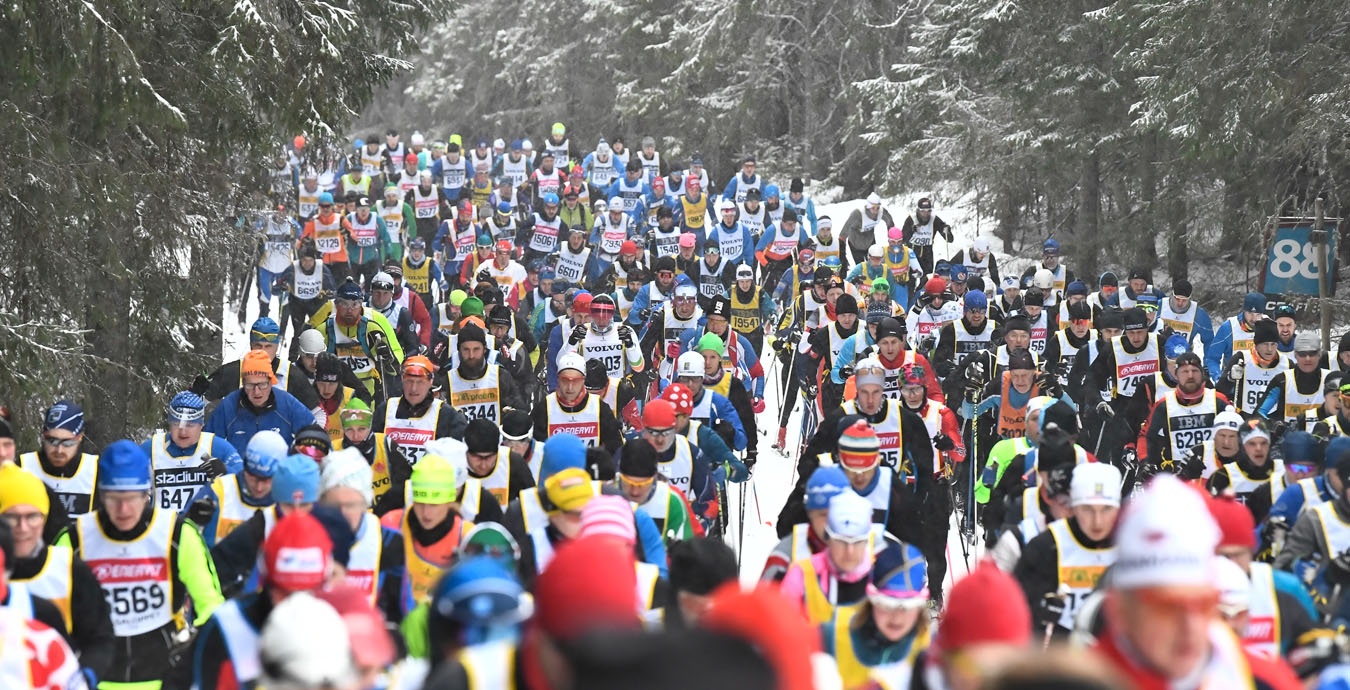 Facts, statistics, news and trivia for the 96th Vasaloppet

On Sunday, March 1, 2020 at 08:00 millions of TV viewers will sit down to follow the start in Sälen of the 96th Vasaloppet. Vasaloppet is fully booked, which means 15,800 registered participants. In total over 58,000 participants have registered for the races in Vasaloppet's Winter Week 2020. Here are this year's conditions leading up to the world's biggest cross-country ski race.

History
Gustav Eriksson’s adventure in Dalarna took place during the winter of 1520–21. This next winter is the 500th anniversary. In 1523 he was elected King of Sweden. The first Vasaloppet took place on Sunday, March 19, 1922. Now the 96th Vasaloppet will take place, which is also the 24th with a special competition class for women (started in 1997). Three races have been cancelled: 1932, 1934 and 1990. Since 1948 the race has always run on the first Sunday of March, except in 2015 when the race ran on the second Sunday because of the World Ski Championships in Falun.

The first live TV broadcast of Vasaloppet took place in 1966. This will be the 43rd time that Vasaloppet (in part or in its entirety) is transmitted live, and it’s the 38th time that the Vasaloppet start is broadcast live on television. 1973 was the first year with a live broadcast in colour. Since 1992 Vasaloppet has been shown live every year.

Since 1922 a total of 588,179 Vasaloppet skiers have completed the 90-kilometre Vasaloppet; put together they have covered a distance equal to 1,320 round the world trips or 69 journeys to the moon and back!

The Average Skier 2020
The average age in Vasaloppet 2020 is 42.4 years and the average participant has skied Vasaloppet 3.6 times before.

Out of the registered Vasaloppet skiers 2020, 62 percent have skied Vasaloppet before. So 38 percent are participating in Vasaloppet for the first time.

A new record is set for the number of female participants in the track this Sunday: 17 percent. In other words, more than every sixth Vasaloppet 2020 participant is a woman!

The Elite
Tore Bjørset Berdal, Norway, won men’s class in Vasaloppet 2019 while Britta Johansson Norgren, Sweden, won the women’s class. The latest men’s class winner from Sweden was Jörgen Brink in 2012. The male winners these past seven years have all been from Norway. This year more Swedes are taking top-three spots in the cross-country cup Visma Ski than have been seen since 2012: Emil Persson (two wins), Oskar Kardin (one second place) and Marcus Johansson (two third places).

Four of the previous women’s class victors are in the elite start group this year: Laila Kveli 2013 and 2014, Katerina Smutná 2016, Lina Korsgren 2018 and Britta Johansson Norgren 2017 and 2019. Britta has the most wins in Ski Classics: 21 (three of which are from this season). She’s leading the total score as well as the Sprit and Climb competitions.

Start lists >
(The elite start group is VL0, after which there are ten additional start groups.)

The current charts show Norwegian leadership on the men’s side and Swedish leaders on the women’s side. There are four Swedish men and five Swedish women on the top ten.

New for this year
New for this year is the Climb-position that Visma Ski Classics has at the highest point of the track, 528 metres above sea level, three kilometres after the start. The first ten men and five first women to reach it get points in the Climb Trophy cup.

The Reward
The awards ceremony for Vasaloppet 2020 takes place at 15:00 on stage at the Vasaloppet finish line. The first prize is a kiss, a garland, a 20-kilo glass trophy and 96,000 SEK (for both the winning man and woman). The men’s class winner will also get the Kranskulla honorary award. The first prize is now raised by 1,000 SEK every year.

There are seven spurt prizes for both men and women: 10,000 SEK in Evertsberg (The Hill Prize) and 5,000 SEK at the six other checkpoints; Smågan, Mångsbodarna, Risberg, Oxberg, Hökberg and Eldris.  (Visma Ski Classics also has its own spurt prizes for Mångsbodarna and Evertsberg.) Vasaloppet’s total prize sum for 2019 is over 567,000 SEK.

If a winner, male or female, breaks the Vasaloppet record time for their class they are awarded a 50,000 SEK record bonus.

Everyone who completes Vasaloppet gets a diploma and a participation medal (unless you claim a placement medal or achievement medal instead).

(Changes can be made up until the start so statistics are not final.)

The largest winning margin in the men’s class was when Nils ”Mora-Nisse” Karlsson won by 21 minutes and 17 seconds. ”We could have finished on our hands,” said the Kranskulla…

The largest winning margin in the ladies’ class, since its official introduction in 1997, is from Vasaloppet 2003: Ulrica Persson won by 10 minutes and 5 seconds.

The smallest margin between the male and female victors was in 2007 when Elin Ek was only 4 minutes and 49 seconds after the male winner Oskar Svärd. (Best total placement for a lady was Justyna Kowalczyk in 2015, who was 71st to cross the finish line.)

Just eight male victors and three female victors have won the race on their first attempt. The latest were Petter Eliassen 2015 and Justyna Kowalczyk 2015. The one with most attempts before a first victory is Jörgen Aukland who won Vasaloppet 2008 the tenth time he participated. On the women’s side Jenny Hansson holds this ”record”: she won Vasaloppet 2011 when participating for the seventh time.

Just eight male and three female winners have managed to defend their Vasaloppet title by winning two years in a row. The latest were John Kristian Dahl in 2017 and Laila Kveli in 2014.

In 2013 Jörgen Aukland became history’s first Vasaloppet winner to pole his way through the whole race without using grip wax (since skate was prohibited). In 2014 Laila Kveli became the first lady to win without grip wax.

Here are all the times for radio, TV and online viewing on March 1:

Vasaloppet.TV
07:00–20:30 Vasaloppet.TV broadcasting from fixed cameras in Sälen, Mångsbodarna, Risberg, Oxberg, Hökberg, Eldris and the Mora finish. There’s also a live broadcast from the Vasaloppet finish, ”Vasaloppet Direkt”, hosted by speakers with commentary on stage and participant interviews as skiers are cheered across the finish line. The camera ”Målgång i Mora” shows all finishes.
vasaloppet.tv >

Sveriges Radio P4
07:18–14:00  Radiosporten is broadcasting Sportextra with Vasaloppet. The traditional start time is 07:18. (As early as 1925 the fourth Vasaloppet was broadcast on the radio.)
sverigesradio.se/radiosporten >

Sveriges Television
07:30–13:00 and 16:00–17:00. SVT1 and SVT Play. Host: Yvette Hermundstad. Live commentary provided by Jacob Hård and Anders Blomquist. Along the track we’ll see Maria Wallberg, Niklas Källner, Daniel Nannskog and Cecilia Ingman talking to participants. Rikard Tynell is SVT’s elite skiing reporter. He has participated in Vasaloppet eleven times and will be delivering reports from the front of the race.
svtplay.se >
svt.se/sport/vasaloppet >

Ski Classics Play
07:50 – Swedish Television broadcasts can only be seen in Sweden but most other countries’ TV companies will also broadcast Vasaloppet. The whole race can also be streamed online from anywhere in the world with English commentary via web TV or mobile on Ski Classics Play (cost 8.99 EUR).
https://play.vismaskiclassics.com/visma-ski-classics >
https://vismaskiclassics.com/the-tour/events/vasaloppet >

Veterans
To call yourself a veteran you must complete a Vasaloppet and/or Öppet Spår according to Vasaloppet’s rules for 30 years (only one race per year counts). From 2020 and on you may also count Nattvasan 90. After the 2019 Winter Week 1,059 veterans (of which 13 are ladies) have skied 30 or more races. 38 veterans have skied 50 races or more (Vasaloppet/Öppet Spår). In Vasaloppet, veterans start in their own row in start group 5 (closest to the wall).

Most races, 60, are by Bengt Eriksson from Sälens IF and Börje Karlsson from Landsbro IF SK. Bengt completed his 60th race in a row in 2013 (54 Vasaloppet and 6 Öppet Spår between 1953 and 2013). 86-year-old Börje skied his 60th race in Öppet Spår this past Monday. Before that he’d completed 59 ”real” Vasaloppet. Gösta Lönnelid from Narkens IF skied his 58th race this past Monday.

Your length shortens during Vasaloppet. The discs in your spine compress and the arch of your foot flattens. During a Vasaloppet, the skiers shrink by a combined 220 metres.

Vasaloppet skiers produce so much energy that it could light 884,000 low-energy lamps (15 W) or about 2 million LED-lights.

Time penalty
If a participant is found to have littered in or along the Vasaloppet course (which is a nature reserve) then he or she will receive a time penalty of 15 minutes. Disposing of litter is permitted in three different ways: In the bins at the Vasaloppet checkpoints; In the marked littering zones between each Vasaloppet checkpoint; Where you as a participant know that a team leader or associate will pick up what you throw. For elite skiers Vasaloppet holds special dialogue, requiring that each team takes responsibility for, and picks up, any of their waste that is thrown along the track.

Train
A special direct train (fully-booked by Vasaloppet participants) runs from Malmö via Gothenburg to Stockholm and Mora.
DIRECT TRAIN >

Sports Movement
Vasaloppet’s operations annually generate about 20–25 million SEK that goes back into the sports movement. About 50 percent goes to the owner clubs (IFK Mora and Sälens IF), about 30 percent is compensation to clubs who supply functionaries, and about 20 percent is in the form of fees to the Swedish Ski Association and Swedish Cycling Federation, which in turn is distributed to their sports clubs.

The Summer Week
Vasaloppet doesn’t just have a Winter Week. Since 2009 there’s also a Vasaloppet Summer Week with eleven mountain bike and running races, such as Cykelvasan 90 and Ultravasan 90. See the complete list of races below.

Even more facts about Vasaloppet 2020 can be found in Vasaloppet’s 132-page Facts Guide, which can also be read online (only Swedish)
vasaloppet.se/faktaguide >

Programme/calendar: Everything happening around Vasaloppet 2020 >