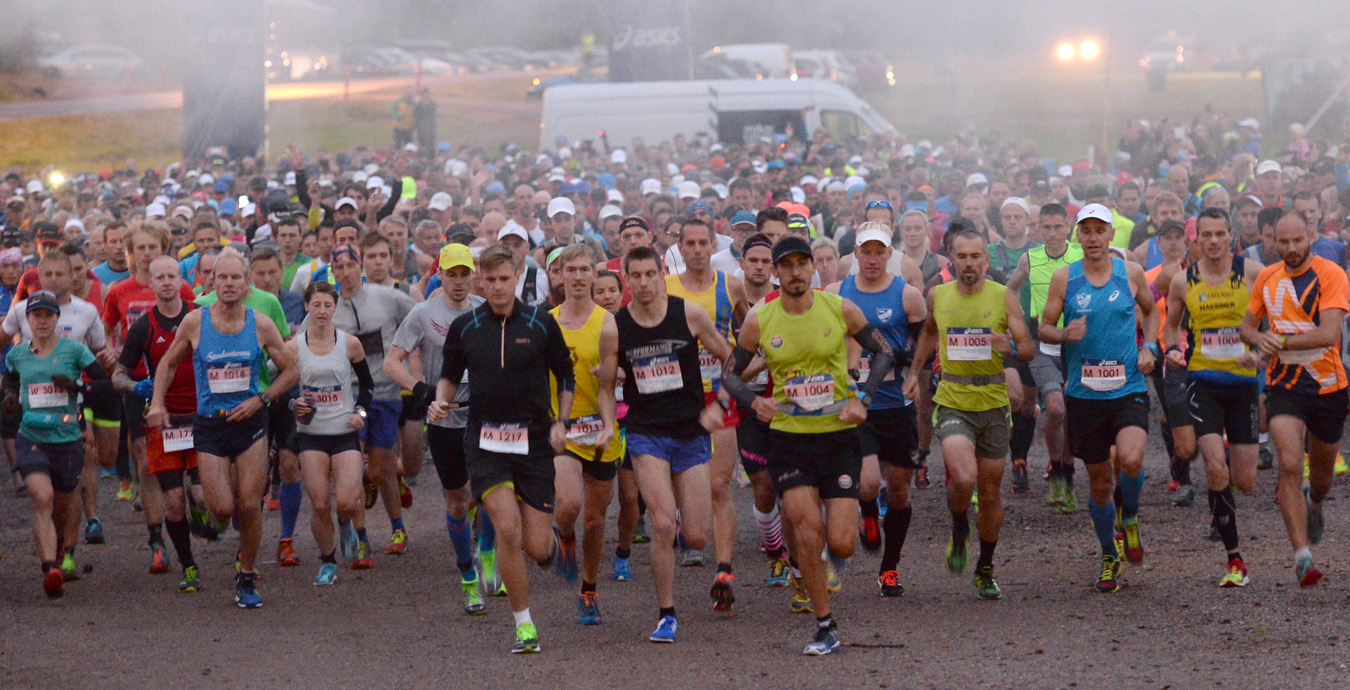 It was a Norwegian and Swiss victory in Ultravasan 90. Norwegian Jarle Risa crossed the finish line five minutes ahead of Fritjof Fagerlund, Rånäs 4H. Third place went to American Patrik Reagan. In the women's class, Jasmin Nunige defended her crown from last year, winning with a large margin and a new record time of 6.54.32.

There were six different nationalities among the top six runners in the men’s class. British Steven Way was fourth, fifth was Belgian Wouter Decock, and sixth Estonian Erala Ranno.

The men set a good pace out of Berga By in Sälen, where the start was held at 05:00 this morning. At Mångsbodarna the leading group consisted of eight runners within 20 seconds, and one of them was IFK Mora’s Jonas Buud, favourite after two straight victories and a fantastic record time of 5.45.08 last year.

But shortly before the Risberg checkpoint, Jonas Buud was forced to abort his race. The injury he sustained in his Achilles tendon a few weeks ago made it impossible to continue.
”I was very unsure before the start, but at first it was going really well. Then right before Risberg, when we were passing some ridges, it started to hurt a lot again,” said Buud.

By the Risberg checkpoint, the leading group consisted of Patrick Reagan from the USA and two Swedes, Elov Olsson, Ockelbo SK, and Fritjof Fagerlund, Rånäs 4H. French Arnaud Perrignon and the eventual winner Jarle Risa were about half a minute behind.

Up towards Evertsberg, Perrignon took the lead, snatching the hill prize with a lead of 17 seconds ahead of Reagan. Fagerlund and Risa were a slim half minute behind the leading Frenchman.

Perrignon may have spent too much energy here, because things changed dramatically up to Oxberg and the tough Lundbäck slopes.

Fritjof Fagerlund showed his strength and pulled away from the others. He took a lead of 1.15 ahead of Risa. The margin down to Reagan and Perrignon was 3.00 and 3.50.

This was when Risa, who was sixth last year and third in the first Ultravasan 2014, picked up the pace and took back that minute from Fagerlund, passing the Hökberg checkpoint only 13 seconds behind. Fagerlund was starting to look worn out, turning to see the Norwegian approaching with quick steps.

Soon Jarle had passed Fritjof Fagerlund, keeping his steps light and his tempo high.
”I had more strength than Fritjof on the inclines. It felt good to make that pass,” said Risa after the race, with the victory garland around his neck.

At the last checkpoint in Eldris he’d created a lead of 2.16 ahead of Fagerlund. By the finish line that margin, down to a worn out Fagerlund, had grown to over four minutes.

But 40-year-old Risa wasn’t sure of his victory until about two kilometres before the finish line, when he was told how large a lead he had. The win meant a lot to Risa.
”This is the greatest thing I’ve done,” he concluded.

Runner-up Fagerlund had this to say on his hard running after half the race:
”I took a little gamble. I came out well from the Evertsberg checkpoint, and know I run well downhill. So I thought I’d try to stretch the gap. But it didn’t hold all the way. I was very tired by Hökberg.”

When Jarle Risa passed it became a mental battle for Fagerlund.
”It’s hard mentally to hold the lead and hope for the win and then get passed. The ending was rough for me and I really had to fight my way across the finish line. All sorts of problems sprang up. Several muscle groups in my legs were totally worn out. I even got problems with flickering and tunnel vision. It was a real struggle.”

But 42-year-old Fagerlund, competing for Rånäs 4H, still took the second place with a margin of about two minutes ahead of Patrick Reagan from the USA.

The American changed socks in Evertsberg and lost a lot of time there, but then he finished strong.
”The track and audience was so fantastic and it pushed me on even though things went up and down both physically and mentally during the race. By the end I felt strong,” said 29-year-old Reagan, by far the youngest in the top three.

Ultravasan 90 Women’s Class
Last year’s winner, Swiss Jasmin Nunige, took charge directly at the start, getting American Sarah Bard along with her. Swedish marathon star Isabellah Andersson, who was making her ultra-debut, was about a minute behind.

But Isabellah passed Bard and started catching up with Nunige. In Evertsberg, halfway, Andersson was first with Nunige on her heels. Sarah Bard was then five and a half minutes behind.

A lot happened up until the next checkpoint in Oxberg. Isabellah was ahead on the downhill slopes near Vasslan but on the Lundbäck slopes she lost a lot of time and by the Oxberg checkpoint, the Swiss had taken a great lead.

When Isabellah finally reached Oxberg she was walking, together with her husband and daughter. With 30 kilometres to go, the Swedish marathon record holder aborted her race with this comment:
”My legs wouldn’t run anymore. They were done. It was bad planning on my part. I should have taken it easy on the slopes.”

”She ran too fast uphill,” the Swiss winner said. ”I told myself to keep it cool.”

And so Jasmin Nunige ran alone, with a huge lead, down to Mora. In Oxberg Sarah Bard was ten minutes behind, and at the finish line the margin was 13.02.

Seasoned Nunige, born 1973, finished very strong, beating her own track record from last year by eight minutes. The new record time is 6.54.32.
”So nice to win but it was tough at the end. But 90 kilometres should be tough,” Jasmin Nunige concluded.

Ultravasan 45
IFK Mora’s Roman Ryapolov managed what he’d set out to do in Ultravasan 45. The Russian elite orienteer, who has lived in Mora with his family for years, won the first Ultravasan 45 in 2014, and last year he came in second after Fritjof Fagerlund. This year, Ryapolov took another victory, beating Fagerlund’s track record from last year by almost four minutes and winning with a time of 2.41.47. Runner-up was Örebro AIK’s Erik Anfält and in third place was Norwegian Tom Erik Halvorsen.

The women’s class also saw a new track record with Lisa Ring from IK Nocout winning with a time of 3.04.18. Lisa, who is only 23 years old, was sixth in the Swedish Championship marathon this year. Runner-up in Ultravasan 45 was Johanna Nilsson, Morjärv, and third was last year’s runner-up Sophia Sundberg, Väsby IK.

Footnote: Ultra is the designation for races longer than the marathon distance of 42,195 metres.