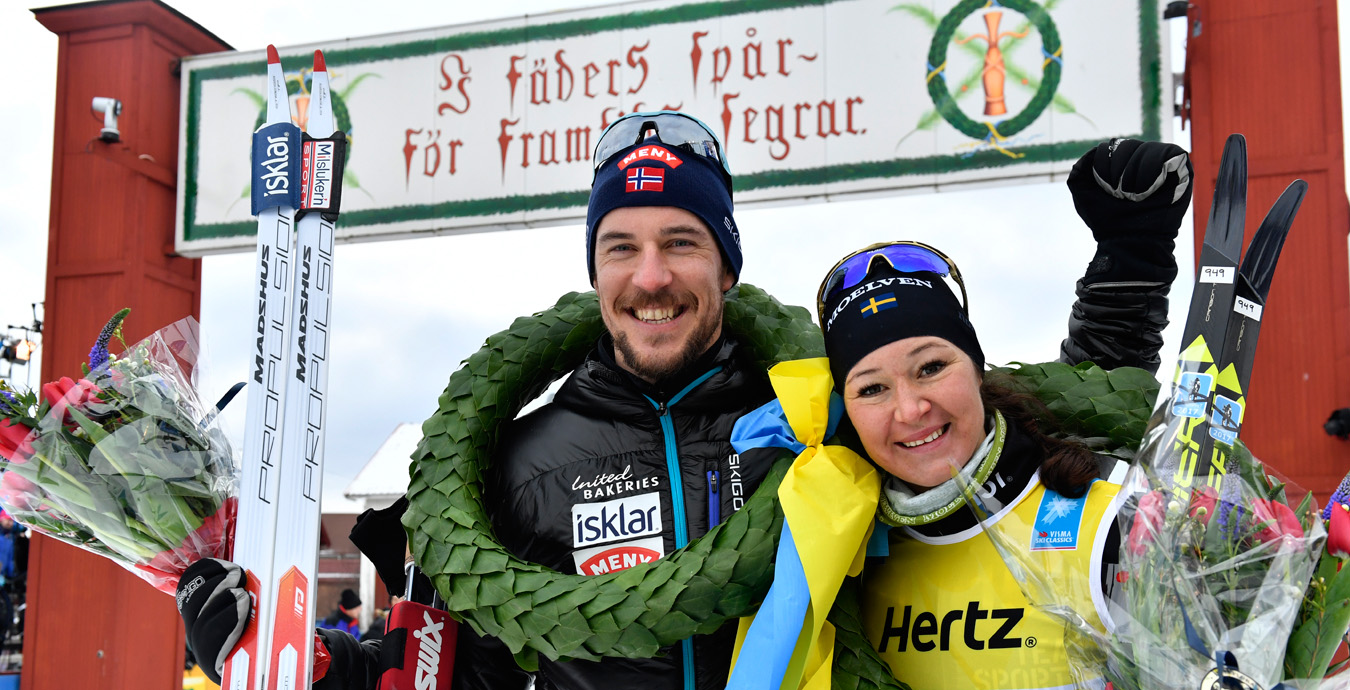 Vasaloppet 2017, with 15,800 registered skiers, was concluded with a tight and thrilling sprint in the men's class where last year's winner, Norwegian John Kristian Dahl, managed to defend his victory just ahead of fellow countryman Andreas Nygaard. This despite major back problems in the days before the start. Britta Johansson Norgren won a long-awaited victory in the ladies' class after placing second these past three years.

The men’s class moved fast right from the start with 2015 victor Petter Eliassen setting the pace and pulling a group of 29 skiers through the first checkpoints. Several favourites were then in the second group.

In Risberg the leading group had grown to 55 skiers and all the favourites were part of that big group. A large group continued to hold together through Evertsberg, Oxberg and Hökberg.

With around eleven kilometres to go, veteran Anders Aukland took the lead and created a small gap together with Stian Hoelgaard. Markus Ottosson whittled down that gap in towards Eldris, where Oskar Kardin also showed up near the front.

Lager 157 Ski Team’s skiers attempted a deciding manoeuvre after Eldris when Fredrik Byström was in the lead. He let teammate Markus Ottosson pass and Ottosson tried to pull away but it did not produce a gap.

With barely four kilometres to go, the final victor John Kristian Dahl showed himself at the front. Other favourites such as Tord Asle Gjerdalen, Ilya Chernousov, Anders Aukland and sprinting cannon Andreas Nygaard were also getting into position.

The final kilometres were a hard battle for position; up the Aukland slope and onto the home stretch the men presented a broad front, skiing in tracks and between them.

The spurt saw John Kristian Dahl make a phenomenal finish in the last moments before the finish line, taking the victory just ahead of Andreas Nygaard and Stian Hoelgaard. Behind the Norwegian trio came last year’s sixth-placed Markus Ottosson, as fourth in total and first Swede.

Dahl, who acquired a back injury this Thursday before Vasaloppet and was unsure if he could participate all the way up until Sunday morning, managed, despite this, to gather himself and summon up strength from deep down.
”It’s completely unreal. I’d given up all ambition to win. Just to be at the start was a victory in itself,” said Dahl.

John Kristian Dahl about the race:
”I just skied metre by metre and tried to manage a little more. I had no power left after Evertsberg. I managed reasonably technical skiing but couldn’t keep my head up. At the start signal, pain stabbed me with every pole stroke. Then I gradually warmed up and it went a bit better. But I had no strength in my arms. I partially let go of the group several times up towards Oxberg and Gopshus. Before Eldris I had to be half a minute behind the lead.”

Despite that, Dahl was at the front a few kilometres later.
”I never gave up. When we got to Moraparken we weren’t that many,” said Dahl.

Markus Ottosson was active at the end and tried to defend his position near the head of the leading group.
”We had a plan to do something with 15 kilometres to go. But it was hard since it’s a bit heavier when you’re in the lead. I had a lot of energy at the end. There was almost no end to it. It was fun. It was only on the Aukland slope that I felt something, but I recovered quick after the curve and felt that I had strength left for the home stretch. But I couldn’t get an optimal run and had to go a bit between tracks,” Ottosson said.

Two more Swedes were in the top ten skiers who reached the finish line within seven seconds. Jens Eriksson was the eighth man and Oskar Kardin tenth.

”It felt good half the race, then I had some stomach problems. Had trouble getting liquid in me and cramp since Evertsberg. It was incredibly strenuous,” Jens said.

The ladies’ class
It was apparent early on that the battle for victory in the ladies’ class would be between Britta Johansson Norgren and Norwegian Astrid Öyre Slind. Favourite and last year’s winner Katerina Smutná from the Czech Republic lost ground quickly and broke off her race in Evertsberg.

To Evertsberg, Johansson Norgren had produced a small gap of barely ten seconds to Slind. The gap grew to an entire two and a half minutes in in Hökberg. Then the Norwegian started catching back up to Britta again. In Eldris she had reduced the distance to about 50 seconds.

But Britta Johansson Norgren stood strong even though she was significantly tired on the final 10 kilometres. She crossed the finish line a minute and 37 seconds ahead of Slind. Of course being runner-up these past three years made the victory extra sweet.

”It was incredibly nice that I managed it. It was hard work from Oxberg. It’s just such an incredible relief that I did it. I’m so tired that I don’t know where to go,” said Britta.

She got reports that the Norwegian was catching up which made it extra important not to lose the men she was skiing with.
”That was my focus all along: ‘do not let go of the back in front of you, whatever you do’.”

The long-awaited victory means a lot to Britta.
”I’ve worked very hard for it for several years. Above all from last summer up until now. I’ve tried everything to find the form to take me here. Now I’m eager to come back next year and hoping that I can take another win.”

Astrid Öyre Slind really tried to join Britta but could not quite manage it. Despite her strong finish she could not take back all the lost ground.
”I made an attempt,” said Slind. ”It can determine a lot, what group you end up in towards the finish. You have to have faith all the way and hope you end up in a train that moves fast. Britta was strong and she deserved to win, and I’m very happy with my performance. This was my best race this year.”

Sara Lindborg skied together with Emilia Lindstedt for a long while but managed to secure her third place with a clear margin at the end.
”It was fast skiing from the start, as expected. I gave what I had but didn’t keep up. Then I had to hunt gaps over the marshes. After that I was mostly in a big group. Towards the end I tried to be active and move ahead of Emilia,” said Lindborg, who, as third, made her best placement in Vasaloppet.

– For the second time, Norway took all three top spots in Vasaloppet. The first time was in 2016.

Vasaloppet is the world’s biggest organizer of recreational races, all year round and part of En Svensk Klassiker. Vasaloppet’s Winter Week with its cross-country skiing and the Summer Week with mountain bike cycling and running attracts a total of almost 100,000 registered participants every year. Since the beginning in 1922 over one million participants have passed under the classic finish line portal in Mora. Vasaloppet is a non-profit making organization owned by IFK Mora and Sälens IF. An engine for public health and organizational activities, in forefathers’ tracks for the victories of tomorrow!

Earlier
Facts, statistics, news and trivia for the 93rd Vasaloppet
Next
Registration for Vasaloppet Winter Week 2018