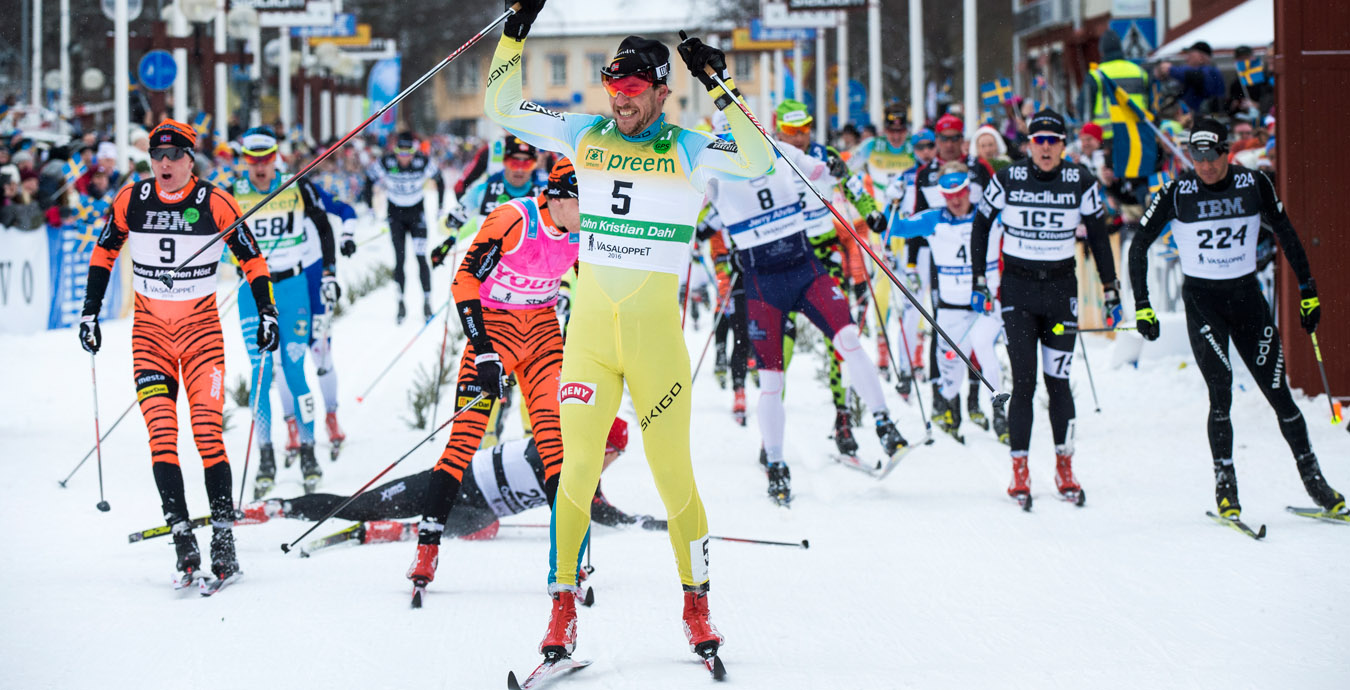 Vasaloppet 2016 was decided with exciting final spurts in both the men's and ladies' class. Norwegian John Kristian Dahl won one of the largest group spurts in Vasaloppet history and took his second victory ahead of his compatriot Stian Hoelgaard. Czech/Austrian Katerina Smutná won the ladies' class two seconds ahead of Britta Johansson Norgren.

Due to fresh snow in the tracks, this year’s Vasaloppet became a group effort where the elite female skiers stayed ahead with the main leading group for a very long time. After about 38 kilometres of skiing, between Risberg and Evertsberg, Norwegian Kjetil Hagtvedt Dammen and Christoffer Callesen, from Team LeasePlan Go, picked up the pace. In Evertsberg this duo were separated from the group by a lead of almost a minute.

In Oxberg they had increased this lead to 2.07. But Dammen got tired on the way in to the Hökberg checkpoint and Callesen ended up alone in the lead. When he reached the last checkpoint, Eldris, his lead had shrunk to about half a minute.

Things happened quickly when the group caught his scent and it was a large company that approached the finish in Mora together, making it one of the largest mass spurts ever seen in Vasaloppet. 29 skiers did battle on the final stretch and the winner from 2014, John Kristian Dahl from Team United Bakeries, turned out to be strongest.

Dahl, who had almost given up hope in Hökberg, played a large part in catching up to Callesen and Dammen.
”Sink or swim, I thought. So I started driving hard but it was difficult to pull the others with me. So I spent a lot of energy there,” Dahl tells us.

In the end Dahl had a clear tactic.
”I defended my position. I had a track to myself for the last four kilometres. It went faster and faster towards the finish. The last 200 metres I used everything I had. I didn’t know that I’d won until after I crossed the finish line. It was a very intense experience.”

This second Vasaloppet victory means a lot to Dahl who has had a tough season.
”It’s wonderful to be able to defend my 2014 win. We’ve had a lot of setbacks in the team this year. This saves our whole season,” said Dahl.

Behind the winner came a row of three Norwegians and young Stian Hoelgaard and Anders Mölmen Höst joined Dahl in the top three. Fourth was another Norwegian, Öyvind Moen Fjeld, Team Santander.

Fifth was World and Olympian Champion from Switzerland, Dario Cologna, skiing for Team Exspirit.
Best Swede was Markus Ottosson, Lager 157 Ski Team, in sixth place, ahead of Jerry Ahrlin, Team Tynell. Third best Swede was Oskar Kardin, Östersunds SK, in tenth place.
”It was a slow start with a crowded course. You got impatient but had to try and keep it cool,” Ottoson said, continuing:
”I had a damn lot of energy but you have to make room for yourself in the end. I was a little too far behind on the last slope.”

To be best Swede in Vasaloppet was of course a nice feather in Ottosson’s cap.
”I’m really happy with it, although of course you want to be even higher up when you’re so close. But it’s crazy how energized I felt at the end. Now I know that I have it in me.” 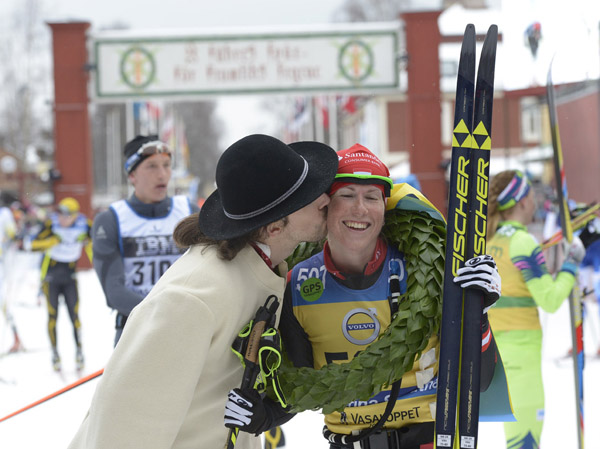 The ladies’ class
Britta Johansson Norgren, Lager 157 Ski Team, started strong and in Oxberg she had a lead of 51 seconds over Katerina Smutná, Team Santander. In Hökberg the distance to Smutná had shrunk to 21 seconds and Lina Korsgren, Team Pioneer Investment – Craft, was also getting closer.
”My group wasn’t moving too fast but I decided not to try and increase its speed. I knew that the others would catch up but it felt better to stay in the group and conserve my energy.”

Britta had a 14 second lead in Eldris but, with a few kilometres to go, the others caught up and Johansson Norgren, Smutná and Korsgren came up on the final stretch together. Smutná snatched the victory two seconds ahead of Britta and seven seconds ahead of Korsgren.
”I’m very happy. This was my big goal for the season,” said Smutná who lost ground at the start of the race but had a very strong finish. ”Everything went perfectly at the end.”

Unfortunately the female skiers were disrupted by male skiers on the final stretch and they didn’t get open tracks as the Vasaloppet organization had planned. Britta said:
”Since we were supposed to have open tracks at the finish, I thought the best plan was to come in second onto the final stretch. I can’t say that I was wrong, since I did what I thought was best. There’s no guarantee that it would have gotten me all the way, but it would have been more fun if we could have had an honest match,” said Norgren Johansson.

Lina Korsgren fell behind after taking a fall at Risbergsbackarna but she came back strong and was part of the final battle for the win.
”It got very messy at the end. The guys around us were fighting for good placements too, but I still think they could have given us some more space,” said Korsgren.

Katerina Smutná is the first Austrian winner in the ladies’ class of Vasaloppet. Smutná was seventh in her first Vasaloppet 2015. In the previous six races of the cross-country cup Visma Ski Classics this winter, Smutná has been first, fourth, second, second, third and fifth.

Britta Johansson Norgren is still in the lead for the overall cup.

Vasaloppet on SVT:
The start, the drama, the finish and all the TV clips

ALL RESULTS FROM VASALOPPET 2016

Earlier
Facts, statistics, trivia and news for the 92nd Vasaloppet
Next
Nattvasan 2017 – 90 K in moonlight