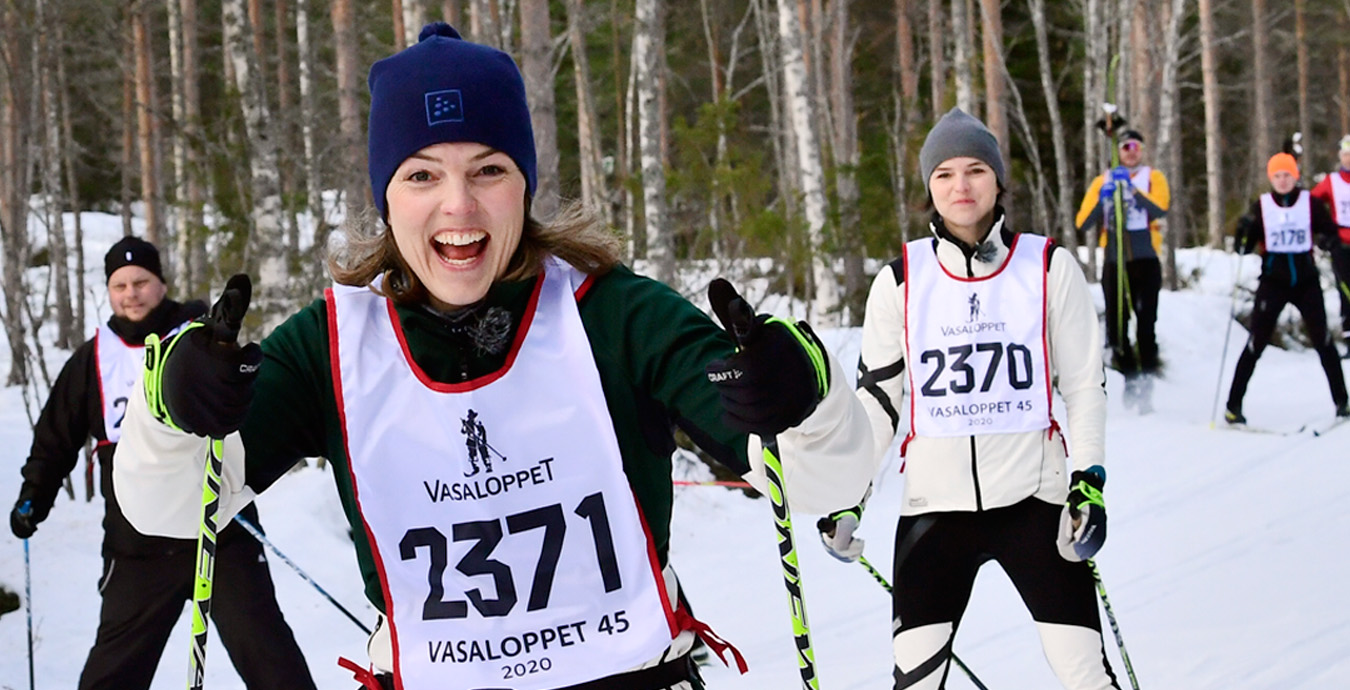 At 09:00 on Sunday, March 15 Vasaloppet opens registration for the ski races in Vasaloppet's Winter Week 2021, which will be held between February 26 and March 7. Here we look back and summarise statistics and other interesting facts from the newly completed Winter Week 2020. How many started? How many viewed the Swedish Television broadcasts? And which celebrities reached the finish line?

Despite a largely green winter in Sweden and Dalarna, Vasaloppet managed to complete the entire Vasaloppet Winter Week 2020.

– The 13 races in Vasaloppet’s Winter Week 2020 (including Barnens Vasalopp in Sälen and in Mora) attracted 59,522 registered participants this year. It’s a slight dip compared to these last years, probably explained in large part by the bad snow conditions that have made ski training difficult in many parts of the country. Registration numbers since 2008 have looked like this:

– 49,036 of those registered came to the start and 93.3 percent of these, 45,769 participants, got to the finish (including the five Stafettvasan sections).

– The tough, snowy Vasaloppet Sunday of 2019 repeated itself this year. On March 1, 85.8 percent, about as large a share as in 2019, of the 13,915 starting participants got all the way from the start in Berga by to the finish in Mora.

– The 11,937 who finished in Mora in Vasaloppet on March 1 made it so there are now 600,116 registered finishes in the 96 Vasaloppet since 1922. Combining all winter and summer races the total number of finishes is now over 1.6 million.

– Sveriges Television’s Vinterstudion broadcast from a studio constructed at the finish line in Mora. The five-hour long live broadcast of Vasaloppet 2020 on SVT1 was viewed by 3.5 million viewers (the average viewership was 1,717,000 viewers). (At the same time as the broadcast from Vasaloppet, the ladies’ relay race in Lahtis was shown on Kunskapskanalen.) In SVT Play the Vasaloppet broadcast had 687,000 play starts.

SVT also broadcast a preview in Vinterstudion on the Saturday, viewed by 486,000 people. The week before Tjejvasan was broadcast for the ninth year in a row. The rainy Tjejvasan was viewed on average by 472,000 people this year.

– Number of bus trips with Vasaloppet’s busses to the start and from the finish: 22,956.

– Newlyweds at the ski-in weddings after the finish line: 12 couples (5 of which were on the Vasaloppet Sunday).

– Tattoos after the finish on the Vasaloppet Sunday: 15 (which was the tattoo artist had time for).

– The best Norwegian not to have won Vasaloppet: Stian Hoelgaard who came second this year was in the top three for the fifth year in a row.

– Second best Norwegian to have won Vasaloppet before: Andreas Nygaard, first in 2018 and sixth in 2020.

– Third best Norwegian to have won Vasaloppet before: Anders Aukland who came eighth. 46-year-old (!) Aukland, who won Vasaloppet as early as 2004, was in the top ten this year for the twelfth time!

– Best non-Norwegian and non-Swede and second best 46-year-old: Stanislav Rezák from the Czech Republic in 17th place. He has participated in Vasaloppet 22 times with a second place best. He’s been in the top ten 15 times.

– Best Dalarna woman, best woman overall and best payout in all categories during Vasaloppet 2020: Lina Korsgren, who won all seven spurt prizes and came first across the finish line. The compiled reward came to 136,000 SEK. Her second place in Tjejvasan also awarded her 30,000 SEK. Lina only had 56 men ahead of her in Vasaloppet, a new record for the women’s class!

– Seven of the top ten participants in Tjejvasan 2020 also got top ten placements in Vasaloppet.

Veterans and others
– Five Vasalopp veterans skied their 50th race. Which means that there are now 43 gentlemen who have skied at least 50 races (one race per year may be counted).

– The week’s record man: There was hard competition but Börje Karlsson who completed his 60th race, thereby matching Bengt Eriksson’s record, probably takes the title. Börje has previously completed 59 Vasaloppet and this year he completed Öppet Spår Monday. Congratulations! Börje Karlsson is reportedly going to choose the slightly shorter races in the future.

– This week’s record woman: There was much competition here too but Carina Hammarstrand who skied nine of the races, completing 393 km, probably wins out this year too. She has completed over 190 races throughout the years in Vasaloppet’s Winter and Summer Weeks. Over 9,000 kilometres over 30 years. When she skied Öppet Spår Sunday this year she officially became a veteran too. Congratulations!

Register now and you have a year to train. There’s snow in the Vasaloppet arena and Vasaloppet will prepare tracks for as long as is possible this spring. Feel free to contact a ski club or coach to train. At vasaloppet.se you will find instructional videos online for ski training, snowless training, skiing machines, etc.
REGISTRATION >

Even more facts about Vasaloppet 2020 can be found in Vasaloppet’s 132-page Facts Guide, which can also be read online (Swedish only):
vasaloppet.se/faktaguide >