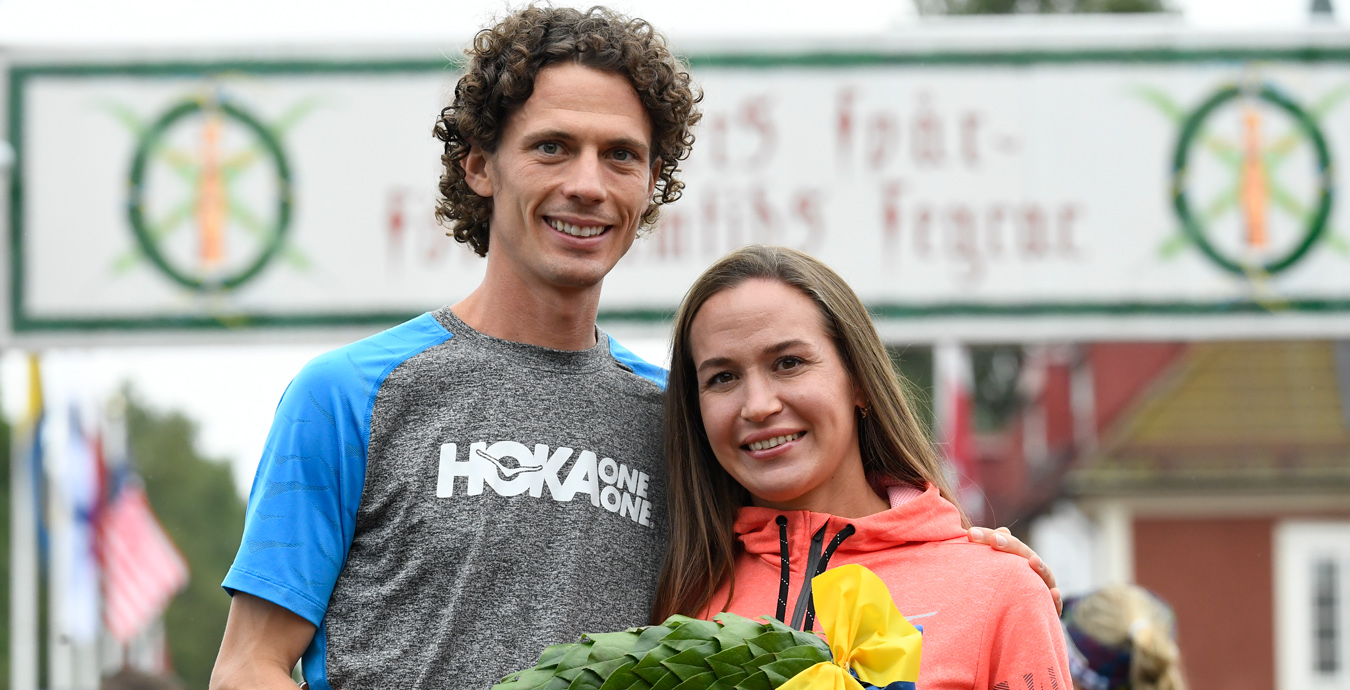 It was eleven degrees and cloudy at 05:00 this Saturday morning in Berga by when the record-sized start took place in the sixth Ultravasan 90. The task facing the 1,218 starting participants was to get across the 90 km from Sälen to Mora.

Ultravasan 90 Men
That the world’s best ultrarunner over the past two years, Jim Walmsley, who set the 50 miles world record this past May, would be the first American to win Ultravasan 90 was no huge surprise. The big question was whether he’d be able to beat Jonas Buud’s record time of 5.45.08 from 2015.

Jim Walmsley set off at a high pace and ran solo through all seven classic Vasaloppet checkpoints.

”I don’t quite think he’ll beat the record,” says Jonas Buud shortly before the start. At the hill prize in Evertsberg Jim Walmsley was 4 minutes and 50 seconds ahead of Jonas Buud’s record passing time from 2015. In Evertsberg he was also more than 10 minutes ahead of Joacim Lantz in second place.

But while Jim Walmsley is known to open very strong, Jonas Buud in his prime was a comparatively slow starter who finished very strong in 2015. And, indeed, between Oxberg and Hökberg Walmsleys grip on the record time slipped. Afterwards he also said that he hadn’t eaten as much as he should. Shortly before Hökberg he stopped for an energy break of 40 seconds. Jim then kept chasing the record, which ended up holding.

Jim Walmsley won the 2019 Ultravasan 90 with a time of 5.47.28, the second fastest in the race’s history, about two minutes off from the record.
”It was a great day out there with lovely weather. It was really fun, running today,” said a sprightly Jim Walmsley right after finishing.

”I probably paid for that strong start today,” Walmsley continued. ”I felt good but I didn’t have the strength to hold Jonas’ record pace today. Maybe the spurt prizes made me push a bit too hard. With 25 kilometres to go I realized it would be hard beating the record. But I had a good day and I’m really happy with my pace towards the end.”

Jim Walmsley enjoyed his day in the Vasaloppet track:
”Ultravasan is a lot of fun, it’s great to run so fast in an ultrarunning race. It’s fun and a bit different; it’s unique and beautiful here.”

He also said he’s tempted to try some other Vasaloppet races, skiing or cycling, and that it’s more than likely that he’ll return to Dalarna.

Joacim Lantz from Ockelbo SK came second with a time of 6.06.10 (which would have been fast enough to get him the win in both 2016 and 2017).
”The first 60 kilometres were fine but then I started feeling cramps and it was really hard to feel chased all the time. I didn’t know how far behind the others were and that made it difficult.”

Third place went to Charles Harpur from Great Britain with a time of 6.09.20. So there were no spurt duels for the top three positions…
”It was more technical than I’d thought so I slowed down a bit for those sections. But it’s so beautiful here that I enjoyed it a lot,” said this year’s UK 100 kilometre champion.

Jonas Buud can still call himself the king of Ultravasan. Both his record time and the record winning margin from 2015 held. Today he came in 12th place, a clear improvement on last year’s time and position (16th) despite spraining his ankle two weeks ago.
”It feels really good, especially that the record still holds, that was most important,” Jonas said with a smile. ”Considering the circumstances it went very well and I’m really happy.”

Ultravasan 90 Women
Alexandra Morozova had an even greater winning margin than Jim Walmsley, repeating her Ultravasan 90 win from 2018. In Evertsberg her lead was 4.56 ahead of Stina Höglund from Skellefteå AIK Friidrott. The winning margin for Morozova was 28 minutes. But she didn’t come close to her own record time, 6.43.55.

She didn’t feel fully recovered from earlier races and finished at 7.11.07.
”It was hard work, a lot harder than last year, especially the last fifteen kilometres,” said the Russian who promised to return to Ultravasan.

There were big time differences in the top three spots with second place Stina Höglund coming in 17 minutes ahead of third place Jenny Ramstedt.
”I think I went a bit too hard, a bit too fast, so there was some pain in my legs for quite a long time,” said the day’s big surprise, Stina Höglund, who came sixth in 2016.

For results, see below.

Ultravasan 45
Ultravasan 45, which started in Oxberg at 09.00, had more women than men in the record-sized start field of 929 participants. Both Roman Ryapolov and Lisa Ring had a chance to take home a third victory. Neither did, though both got into the top three.

In the men’s class it was Linköping runner Fredrik Eriksson, IK Akele, who won with a time of 2.49,21.
”This is my biggest win; really great that I could hold the whole way,” said the former hockey player.

These last two years Fredrik has been fifth and fourth in Ultravasan 45.
”I knew I had good opponents so my tactic was to push hard from the start. But the last fifteen were hard and I had some cramps,” says Fredrik Eriksson who is hoping to tackle Ultravasan 90 2020.

Roman Ryapolov came second and Simon Hodler third. Roman now has two wins and two second placements in Ultravasan 45.
”It went okay, it’s hard to get the right pace. I’m not getting any younger,” said Roman Ryapolov who joked and said that he’d also run Ultravasan 90 but not before 2029!

In the women’s class of Ultravasan 45 local runner Sofia Byhlinder won with a time of 3.09.40. Last year she said she hoped to improve her time and so she did; her time today was almost six minutes better than her 2018 time. These past five years she’s now placed fifth, not started, seventh, third and first! Petra Kindlund came second today and Lisa Ring third.

”It’s magical,” Sofia Byhlinder said of her win, ”I fell in love with this stretch the first time I ran it. Today I was behind Lisa Ring for the first fifteen kilometres, that was my plan, but then I felt I had more in me and I picked up the pace and ran ahead and alone the rest of the way.”

Achievement medals are awarded in Ultravasan 90 to participants who complete the race in medal time. The medal time for men is 9.5 hours. Medal time for women is 11 hours.