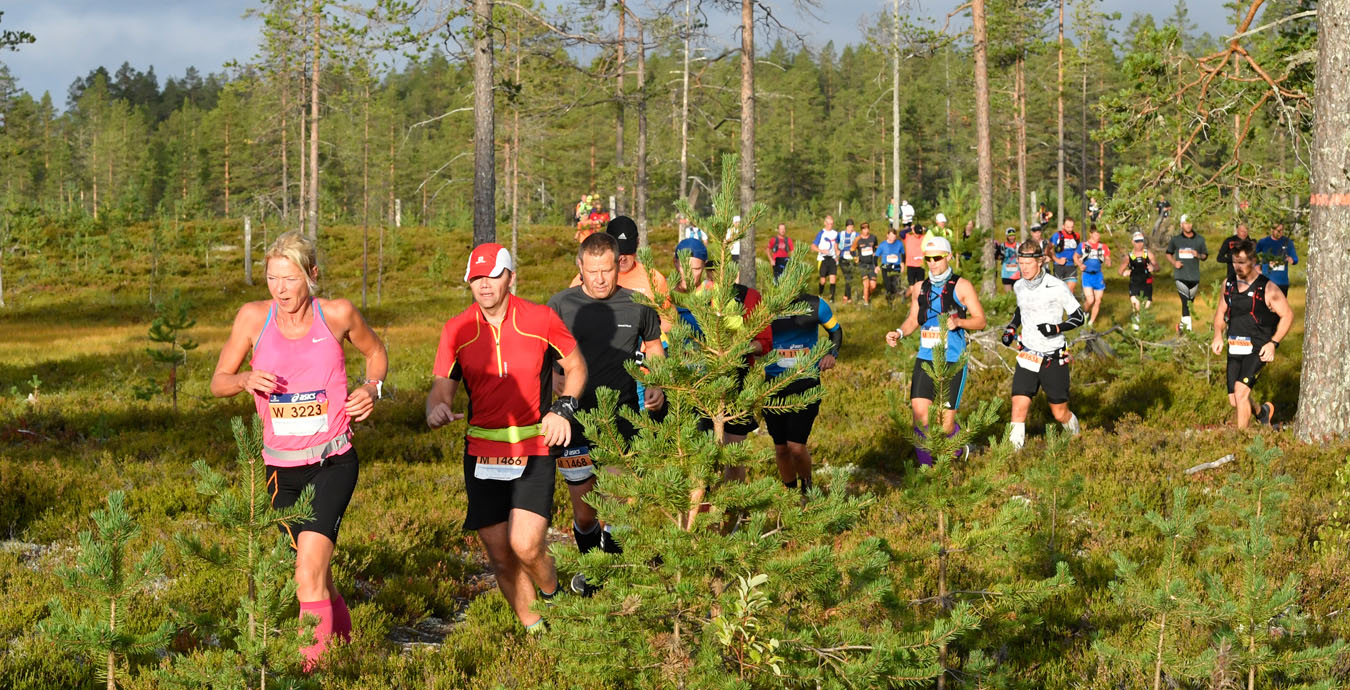 Vasaloppet's Summer Week and the Vasaloppet year 2019 will wrap up on Saturday, August 17 with the big running day where over 6,000 people participate; both world elite runners and exercisers from 22 countries. About 2,000 run individually and 4,000 are running relay races. Many of the individual runners also hope to complete the year's Vasaloppstrippeln. Here we'll give some facts, favourites, statistics and trivia in preparation for the races.

This is the 6th Ultravasan, the 29th Vasastafetten and the 3rd Vasakvartetten. In total there are ten classes (of which eight are competition classes) running on Saturday, August 17:

The two relay races:
– Vasakvartetten. Running relay for four-person teams. Start in Sälen at 07:00.
90 km from Sälen to Mora divided into four sections of 23.5, 23.2, 24.2 and 19.1 km. (Vasakvartetten has three classes: Women, Men and Leisure. Participants in the Women and Men classes compete for prize money. Men = Women are allowed. Women = Only women. Leisure = Any mix of women and men allowed. In the Leisure class a single participant may run several sections.)

– Vasastafetten. Running relay for ten-person teams. Start in Sälen at 09:00.
90 km from Sälen to Mora divided into sections 4.5–15 km. (Vasastafetten has three classes: Women, Men and Leisure. Participants in the Women and Men classes compete for prize money. Men = Women are allowed. Women = Only women. Leisure = Any mix of women and men allowed. In the Leisure class a single participant may run several sections.)

Ultra is the name of races longer than the marathon distance of 42,195 metres, and ”trail” or ”terrain” means that the main part of the race is not on asphalt. Ultravasan 90, Vasakvartetten and Vasastafetten run on the following surfaces: 60 km forest road/Vasaloppet track, 6 km gravel, 18 km paths and 6 km asphalt. The course elevation is 867 metres.
More information on sections and surfaces >

Track changes 2019
A small change that Vasaloppet hopes will enhance the running experience even further: Right before Mångsbodarna, about twenty kilometres from the start in Sälen, the track has been redrawn and it now runs in the woods over marshlands where newly-built wooden walkways bring the runners through a beautiful pine forest. It’s a stretch of about 3 km and this change will affect runners in Ultravasan 90 as well as runners on the first section of Vasastafetten and Vasakvartetten.

NOTE! The teams (meaning the team leader) in Vasastafetten and Vasakvartetten should fill in their team line-up on ”My Pages” at vasaloppet.se, and it is possible to make changes up until the start of the race.

Breakfast run hosted by Jonas Buud as a warm up
On Friday, August 16 at 09:00: Elite and recreational athletes will run together. A jog and breakfast. Mora Ski Stadium in Hemus, Mora. Members of the media are very welcome to photograph and interview participants.

Ultravasan 90, participants to keep an eye on 2019
The sixth ever Ultravasan 90 is attracting world elite profiles within ultrarunning. 29-year-old Jim Walmsley from Arizona, USA, set a new world record for 50 miles (80,467 km) at the start of May with a time of 4.50.08 at an invitation race in California. This June he also improved on his own record time from 2018 when he for the second time won the big ultrarunning race The Western States 100-Mile Endurance Run (161 km), also in California.

Jim Walmsley, USA, no 1011, @walmsleyruns
World record holder for 50 miles. Has won the Western States 100-Mile Endurance Run both in 2018 and 2019.
Read our new interview with Jim:
https://www.vasaloppet.se/en/news/jim-walmsley-in-ultravasan-90-i-have-a-good-chance-running-for-a-win

Linus Wirén, Sweden, no 1016, @linuswireen
Second, first, second and third these past years in the 100 km Swedish Championships.

Jonas Buud, Sweden, no 1019, @jonasbuud
Record holder in Ultravasan 90. Not investing as much now as he did then.

Ultravasan 45
Here are some interesting names in this race:

Lisa Ring, Sweden, no 5001, @lisaspring93
Lisa ”Spring” has placed first, second and first in the three previous Ultravasan 45. Lisa won the 100 km Swedish Championship this summer. She’s also aiming to become the first woman to complete Vasaloppstrippeln 45 in under 10 hours. Lisa has completed Halvvasan 2019 in 3.27.37 and Cykelvasan 45 in 2.06.39.

What runners are participating in Ultravasan 90 and Ultravasan 45?
Start lists >

TV and radio
Saturday, August 17 from 04:30–20:30 Vasaloppet.TV is broadcasting live from Ultravasan 90, Ultravasan 45, Vasastafetten and Vasakvartetten with commentary, cycling reporters and features as well as separate livestreams from the starts in Sälen and Oxberg, the Hökberg checkpoint and, of course, all the finishes from the finish line in Mora. Broadcasts can also he viewed after the fact.

The Vasaloppet radio is broadcasting live at 04:45–15:00. Listen in the Mora/Siljan area at 94.1 MHz, Oxberg/Älvdalen at 89.1 MHz and Sälen at 107.6 MHz. Also online and via your phone. You can find the Vasaloppet Radio in our free app Vasaloppet Sommar 2019.
VASALOPPSRADION.SE >

Estimated finish
Those who want to see the first runners finish should be in place no later than 10:40 on Saturday morning. The finish line closes at 20:00.

Follow participants via live results, text and app
Live results will, as usual, be available at vasaloppet.se. It is also possible to follow specific participants via text message and in the updated free app ”Vasaloppet Sommar”. Some participants are equipped with GPS.
FOLLOW PARTICIPANTS >

Previous Ultravasan victors
Last year new records were set in three classes  – Jonas Buud’s 5.45.08 from Ultravasan 90 2015 was the only record to hold.

In 2019 many people have been completing the 90-kilometre skiing and cycling as welle as those who have completed both Halvvasan and Cykelvasan 45. For this Saturday’s running 298 and 164 of these people are registered, respectively.

Events
There is a lot happening in Sälen and Mora during Vasaloppet’s Summer Week 2019.
Take part in the whole programme >

Background – The story of Ultravasan
A happy coincidence led to Ultravasan seeing the light of day. Namely the fact that Mora was home to one of the world’s foremost sports organizers, Vasaloppet, as well as one of the world’s then most foremost ultrarunners, Jonas Buud! He brought experiences from ultrarunning races all over the world and was eager to give other ultrarunners the opportunity to run a race in the classic terrain between Sälen and Mora. ”If you can ski and bike between Sälen and Mora, surely you can run it too,” enthusiasts said.

It was not hard to find interested test runners, for there were many who wanted to run an ultramarathon on classic ground. In connection with Vasastafetten 2010 there were therefore about twenty experienced ultrarunners, invited from all around the Nordic region, running a test race to see how it would all work. Yes, a few had actually even run the whole stretch before that. The race was named ”SM90”, where SM stood for Sälen-Mora and 90 for the amount of kilometres – but unofficially ”Ultravasan” was already a potential name associated with this test race.

After a few years of thinking and planning it was time, in 2014, for Vasaloppet to challenge the runners of the world! That was the starting shot for the first real Ultravasan between Sälen and Mora. The trend with individual extreme races is very strong in many parts of the world and the goal with Ultravasan was to become the largest ultra trail race in Scandinavia and attract a strong international elite.