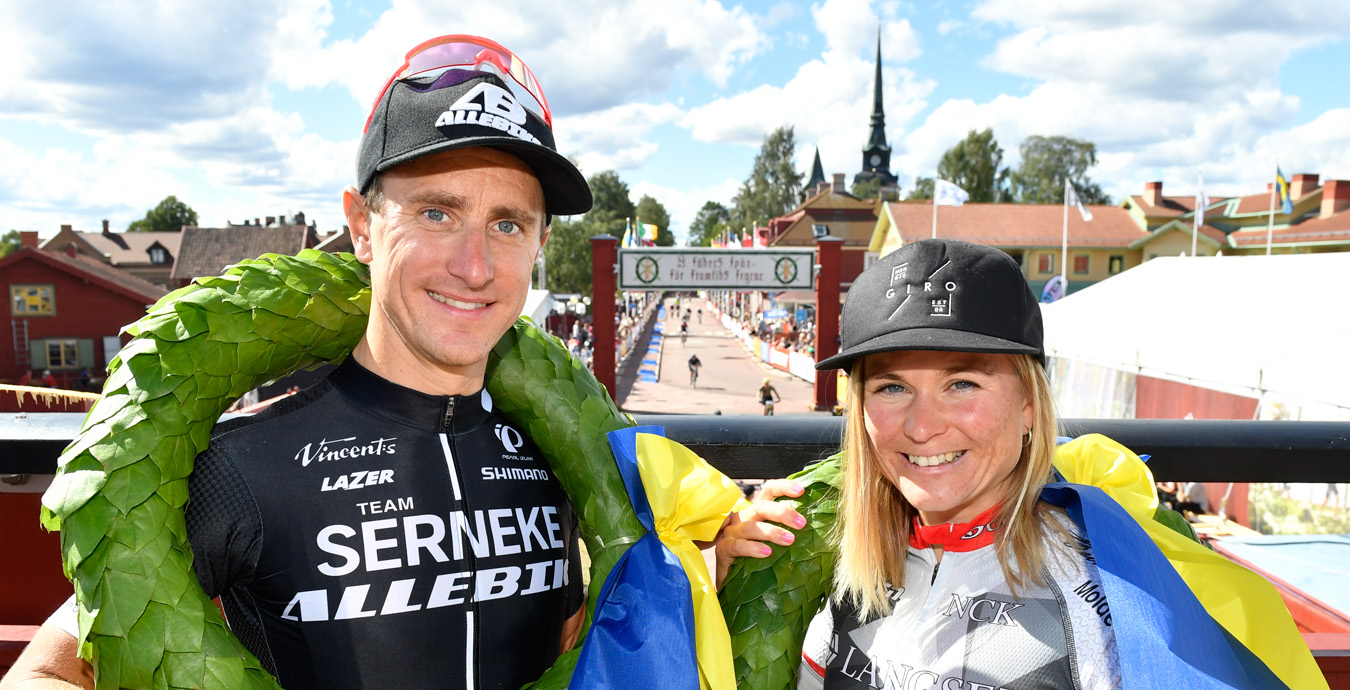 Michael Olsson, Team Serneke Allebike, and Hildegunn Gjertrud Hovdenak, Nesset CK, won the tenth Cykelvasan this Saturday. Both winning cyclists settled the outcome on the final stretch with very strong spurt finishes.
"It's huge to win this and so wonderful for the team. We bike so well together," said Michael Olsson.

A large group held the lead for a long time in the men’s class. Halfway, in Evertsberg, the group consisted of 41 cyclists. Emil Lindgren took the hill prize ahead of Norwegian Thomas Engelsgjerd.

Up to Oxberg, via the Lundbäck slopes, things started happening in the big group. At the checkpoint Dennis Wahlqvist and Johan Landström broke free from the group, creating a gap of 15 seconds to the eleven cyclists behind.

A crucial stage followed when Michael Olsson and Norwegian Emil Hasund Eid caught up between Hökberg and Eldris.

”It was incredibly hard work once we got ahead. I was cramping up a bit towards the end. I tried to drive hard, but not too hard,” Olsson, from Stenungsund, said after the race, continuing:
”I knew I had Emil and Dennis (team mates Lindgren and Wahlqvist) behind me. So I felt pretty safe and like I didn’t have to max out. I knew they’d take it if I didn’t.”

How do you value this victory?
”It’s huge to win this and so wonderful for the team. We bike so well together. This is on my career top three, right after my two Swedish country road championship golds.”

Hasund, in second place, was satisfied with his first Cykelvasan.
”It was a great race and I’m very happy. I had not biked any part of the course before so everything was new.”

”I did not have a chance on the final stretch. I was completely finished. But I might come back and win it next year,” Emil Hasund Eid says with a smile.

Emil Lindgren, Team Serneke Allebike, came first in the following group. The goal had been victory but Emil was very happy to see his team win.
”This was fantastic. A great race from all of us. We biked incredibly well,” says Emil who took his fourth top-three position in Cykelvasan.

”I am super happy. Of course I wanted to win but this was a win for the team. Dennis pushed hard in Evertsberg as planned. I had thought of making an attack towards the end but we were so close and I had to change strategies and observe.”

That group stuck together up until Evertsberg where Gustafzzon passed the checkpoint first, a few seconds before the others. In Oxberg Salinger was 30 seconds ahead.

The four cyclists took turns leading the way to Mora and on the final stretch Hildegunn Gjertrud Hovdenak, 33 years old today, was strongest. 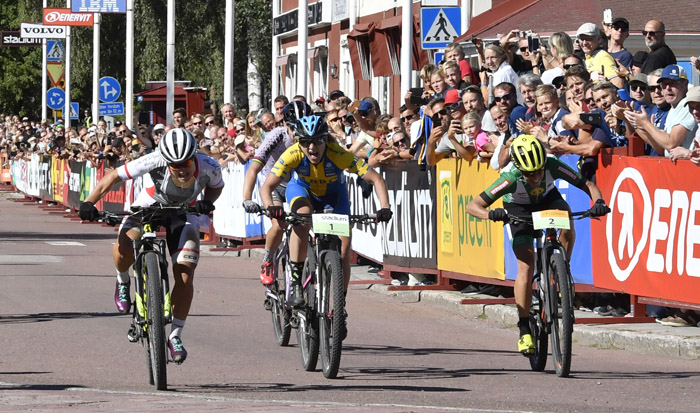 The Norwegian thereby took her second Cykelvasan victory. She also won in 2014. After about 30 km Hovdenak fell, which also affected her decisions during the rest of the race.
”It cost me a lot to rejoin the leading group. So after that I didn’t go for any spurt prizes, I felt I had to save it all for the final spurt,” says Hovdenak.

”I was really longing to win this again. It was truly wonderful to make it and it feels so great to win here. It’s such an incredibly good event, and pleasant after finishing.”

Hanna Bergman, Falu CK, who won the first Cykelvasan in 2009 and who, participating six times, has never placed lower than fourth, was happy to cross the finish line second today.

”The race was a bit different compared to previous years. I thought it went fairly slow for a long time.”

How did you experience the finish?
”We took turns leading for a long time but with a kilometre to go all that stopped and we had to be cunning. I usually can’t hold back but this time I thought I’d stay behind. Hovdenak was excellent in the spurt but this was the first time I beat Jennie (Stenerhag) in a spurt. So I am happy and satisfied.

Four-time winner Stenerhag who fought her way back from a very difficult thigh injury had to settle for third place this time.
”Honestly I’m glad I was even part of the final spurt. I didn’t think I would be. I had nothing in my legs today. It was painful and heavy. I should be really glad that I cracked the top ten today,” says Stenerhag.

What do you have to say about the race?
”It was nice, and flat. Very few slopes. But we cycled in a nice, even group. But for me it was a bit confusing since I wasn’t familiar with the spurt prizes and the course.”

”I didn’t have a good grasp of the finish either so I pushed a bit early. But Hildegunn deserved to win, she was strong.”

Cykelvasan continues this Sunday with the competition Ungdomscykelvasan as well as the leisure races Cykelvasan 30 and Cykelvasan 45 – all starting in Oxberg. Want to participate? Registration is possible all the way up until the start!

CYKELVASAN 2019
Registration for Cykelvasan 2019 opens on Sunday, September 16, 2018 at 09:00 on Vasaloppet’s website! Want to be reminded when registration is getting close? Register your email today at www.vasaloppet.se 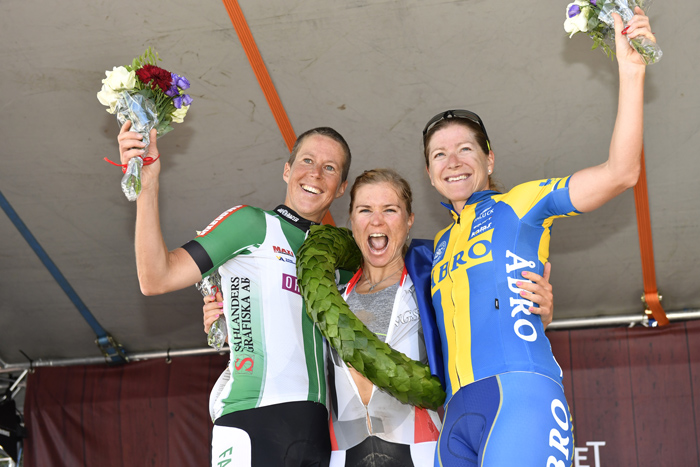 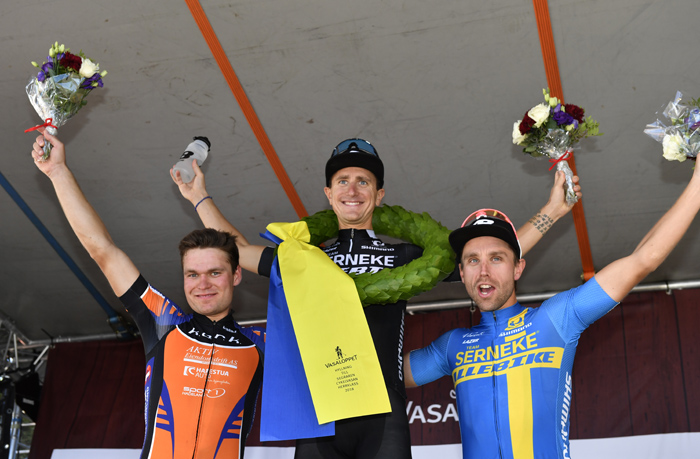 NOTE! All results are available here

Earlier
Cykelvasan 2018 – the biggest Nordic mountain bike race celebrates its tenth anniversary
Next
Get ready for Ultravasan, Vasastafetten and Vasakvartetten 2018