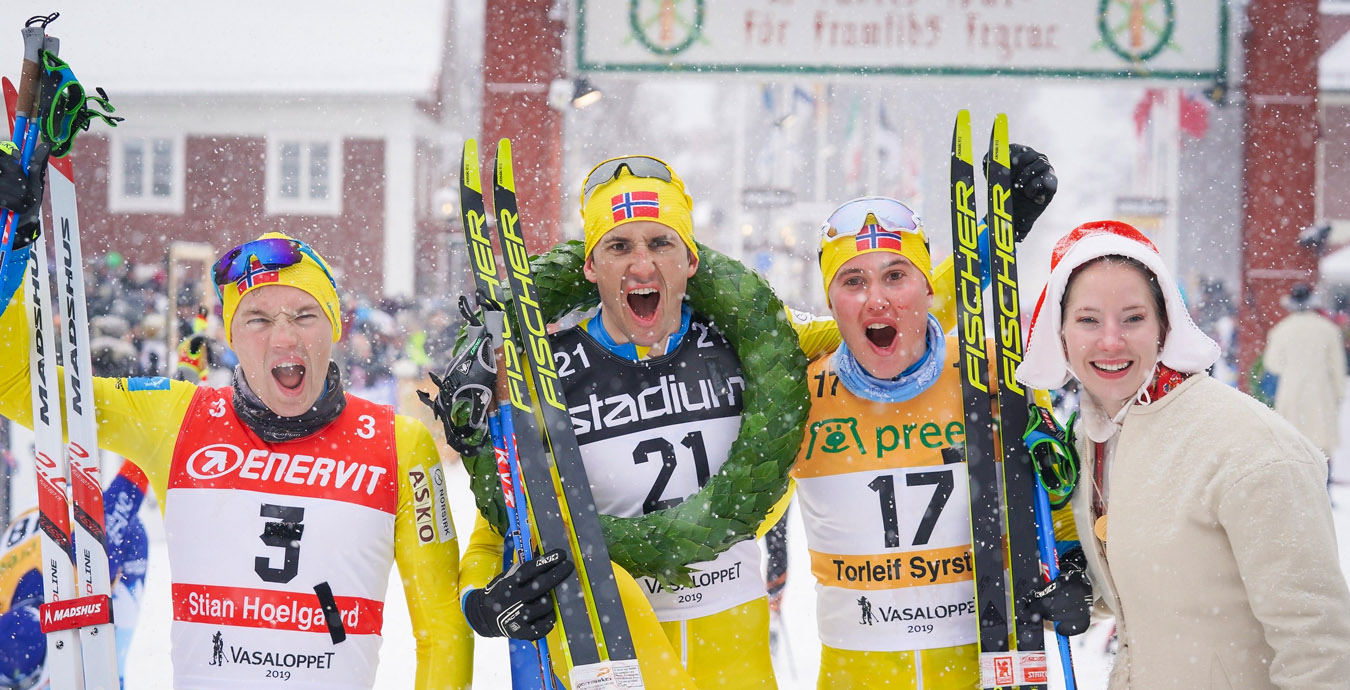 Team Koteng had a glorious day in Vasaloppet as the team’s pro skiers managed to lock all podium places. Tore Bjørseth Berdal broke away five kilometers before the finish and won the race while Britta Johansson Norgren, Lager 157 Ski Team, left her opponents behind early to win the women’s race.

The 95th edition of Vasaloppet, the largest ski race in the world, took place in extremely challenging conditions as it kept snowing throughout the race and some gusty winds made the 90 km journey even harder.

In the men’s race, there were no decisive breakaways or key action until the final five kilometers. Berdal took advantage of an opportunity given to him by his teammates and broke away from the huge lead group. He was able to maintain the gap and finished the race as the winner. He was followed by his teammates Stian Hoelgaard and Torleif Syrstad. Last year’s winner Andreas Nygaard, Team Ragde Eiendom, was fourth.

“I’m taken by this victory,” the emotionally moved Berdal admitted at the finish. “Our captain John Kristian Dahl organized our troops and manipulated this victory for me. My teammates blocked the way, and John just shouted to me that it was time to go. I did what was asked and kept thinking that I have to be stronger than last year when I was in a similar breakaway as well. This is an amazing day for me and our team, a dream come true!”

In the women’s race, Johansson Norgren found a suitable male group to follow, which gave her an edge over her rivals Lina Korsgren, Team Ramudden, and Katerina Smutná, ED System Bauer Team. She was able to stay with the group and keep up her steady pace. She finished the best part of four minutes ahead of Korsgren, who beat Smutná in a sprint finish.

“My second win is even better than the first one,” Johansson Norgren said with tears in her eyes. “I was so tired after Evertsberg, and I was afraid that the other women could eventually catch up. Only about a kilometer before the finish, I realized that I was going to be the winner. It was a tough race, and I’m really worn out right now, both physically and emotionally. But at the same time, I’m so happy!”

Olof Jonsson, Team Ramudden, won the first sprint in Mångsbodarna while Stanislav Rezac,  Slavia Pojistovna Team, was the fastest at the second one in Evertsberg. Johansson Norgren won both women’s sprints. There were no climb competition points on offer in the race.

Morten Eide Pedersen, Team BN Bank, holds the first position in the men’s climb competition. Syrstad took the lead in the men’s youth category while Sofie Elebro, Team Ragde Eiendom, is the leading lady in the same competition. Lager 157 Ski Team is now facing a tight fight against Team Ragde Eiendom and Team Koteng in the pro team category. Today’s winners are also the leaders of the Visma Nordic Trophy, a mini-tour within Visma Ski Classics, that runs until Yllas-Levi at the end of the season.

The next event in Visma Ski Classics is Engadin Skimarathon, the first skating race in the tour’s history, on Sunday March 10.