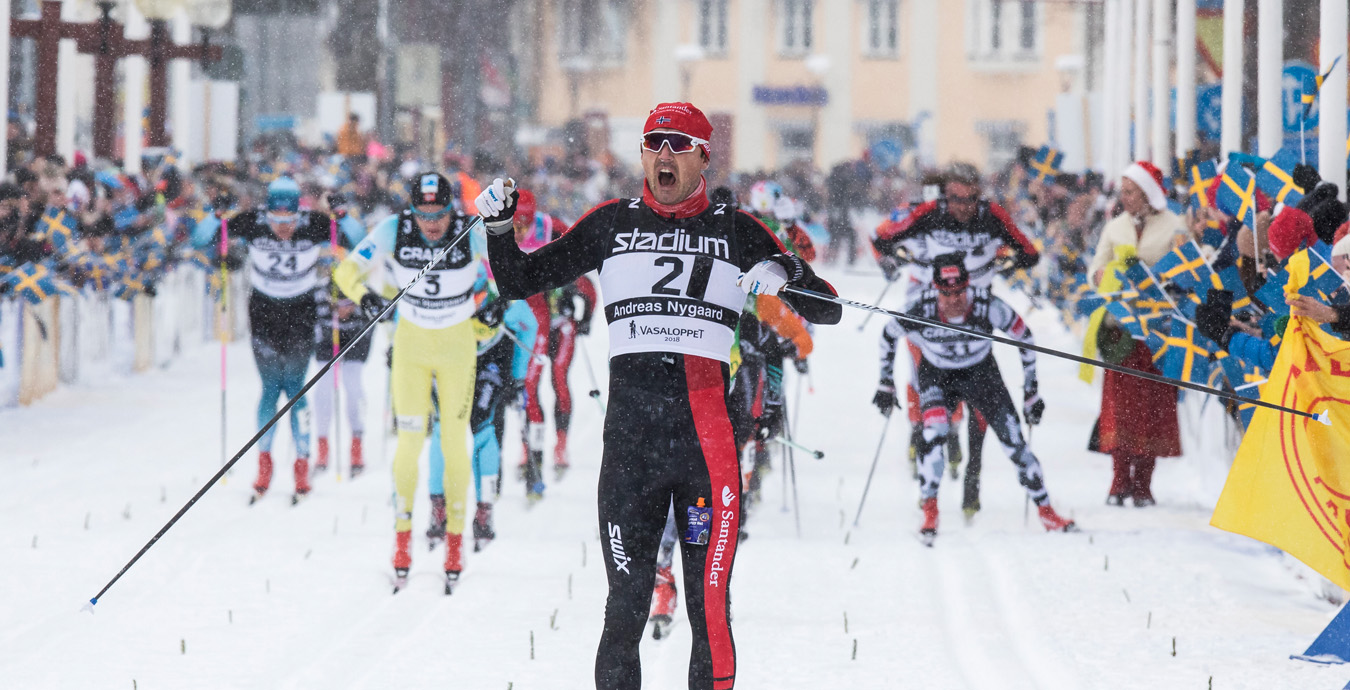 Facts, statistics, news and trivia for the 95th Vasaloppet

The 95th Vasaloppet will start in Sälen on Sunday, March 3, 2019, at 08:00.  Vasaloppet is fully booked, as usual, which means 15,800 registered participants. In total around 62,000 participants have registered so far for the Vasaloppet Winter Week 2019 races. This is the 42nd year that Vasaloppet will be broadcast live on Swedish Television. Here is some background information for the world's biggest cross-country ski race.

History
Gustav Eriksson’s adventure in Dalarna took place during the winter of 1520–21. In 1523 he was elected King of Sweden. The first Vasaloppet took place on Sunday, March 19, 1922. Now the 95th Vasaloppet will take place, which is also the 23rd with a special competition class for women (started in 1997). Three races have been cancelled: 1932, 1934 and 1990. Since 1948 the race has always run on the first Sunday of March, except in 2015 when the race ran on the second Sunday because of the World Ski Championships in Falun.

The first live TV broadcast of Vasaloppet took place in 1966. This will be the 42nd time that Vasaloppet (in part or in its entirety) is transmitted live, and it’s the 37th time that the Vasaloppet start is broadcast live on television. 1973 was the first year with a live broadcast in colour. Since 1992 Vasaloppet has been shown live every year. Vasaloppet and SVT’s current broadcasting agreement extends until 2020. Vasaloppet was first broadcast on Swedish Radio in 1925.

Since 1922 a total of 575,620 Vasaloppet skiers have completed the 90-kilometre Vasaloppet; put together they have covered a distance equal to 1,292 round the world trips or 67 journeys to the moon and back!

Counties
Västra Götaland has now passed Stockholm as the county with most participants in Vasaloppet! Halland also breaks into the top ten counties list this year. The ten biggest counties in Vasaloppet 2019 are, according to this week’s statistics: Västra Götaland 2,787 participants, Stockholm 2,527, Jönköping 801, Dalarna 787, Skåne 705, Östergötland 700, Uppsala 675, Halland 533, Västerbotten 459, Värmland 433. (Changes can be made up until the start so statistics are not final.)

The Average Skier
The average age of Sweden’s population (2018-12-31) is 41.23 years. The average age in Vasaloppet 2019 is 42.2 (42.8 for the gents and 39.0 for the ladies) and the average participant has skied Vasaloppet previously 3.7 times. For the first time ever there are over 2,500 women ladies registered for Vasaloppet, which means we’ll have 16 percent female participants in the tracks this Sunday.

The Elite
Andreas Nygaard, Norway, won Vasaloppet 2018 and the ladies’ class victor was Lina Korsgren, Sweden. The latest men’s class winner from Sweden was Jörgen Brink in 2012. The male winners these past six years have all been from Norway.

Cross-country cup
The international cross-country cup Visma Ski Classics takes place for the ninth time. Vasaloppet is the season’s eighth race, after which four competitions remain: Engadin Skimarathon (50 km) in Switzerland on March 10, Birkebeinerrennet (54 km) in Norway on March 16, Reistadlöpet (42 km) in Norway on April 6 and Ylläs-Levi (70 km) in Finland on April 13. The winner of each race in the cup gets 200 points, second place gets 170, third 140, fourth 120 and fifth 100. Thereafter 95, 90, 85, 80, 75 and so on down to 1 point for 50th place.

The Reward
The awards ceremony for Vasaloppet 2019 takes place at 15:00 on stage at the Vasaloppet finish line. The first prize is a kiss, a garland, a trophy and 95,000 SEK (for both the winning man and woman). The men’s class winner will also get the Kranskulla honorary award. The first prize is now raised by 1,000 SEK every year.

There are seven spurt prizes for both men and women: 10,000 SEK in Evertsberg (The Hill Prize) and 5,000 SEK at the six other checkpoints; Smågan, Mångsbodarna, Risberg, Oxberg, Hökberg and Eldris. Vasaloppet’s total prize sum for 2019 is over 565,000 SEK. (Visma Ski Classics also has its own spurt prizes for Mångsbodarna and Evertsberg.)

If a winner, male or female, breaks the Vasaloppet record time for their class they are awarded a 50,000 SEK record bonus.

Just eight male and three female winners have managed to defend their Vasaloppet title by winning two years in a row. The latest were John Kristian Dahl in 2017 and Laila Kveli in 2014.

The largest winning margin in the men’s class was when Nils ”Mora-Nisse” Karlsson won by 21 minutes and 17 seconds. The largest winning margin in the ladies’ class, since its official introduction in 1997, is from Vasaloppet 2003: Ulrica Persson won by 10 minutes and 5 seconds. The smallest margin between the male and female victors was in 2007 when Elin Ek was only 4 minutes and 49 seconds after the male winner Oskar Svärd. (Best total placement for a lady was Justyna Kowalczyk in 2015, who was 71st to cross the finish line. Britta Johansson Norgren was 89th that same year. Elin Ek was 92nd in 2007.)

In 2013 Jörgen Aukland became history’s first Vasaloppet winner to pole his way through the whole race without using grip wax (since skate was prohibited). In 2014 Laila Kveli became the first lady to win without grip wax.

Live Broadcasts around the World
In addition to Sweden, Vasaloppet 2019 will be live broadcast on TV in the following 16 countries: Norway, Finland, Italy, Czech Republic, Poland, France, Denmark, Latvia, Israel, Greece, Malta, Cyprus, Turkey, Australia, New Zealand and Canada. A 52-minute recap of the race will also be broadcast on Eurosport Europe (53 European countries). Here are all the times for radio, TV and online viewing:

Visma Ski Classics
07:45 – The whole of Vasaloppet is live streamed online with English commentary. Can be seen worldwide at a cost of 75 SEK.
vismaskiclassics.com/the-tour/events/vasaloppet
play.vismaskiclassics.com/visma-ski-classics/video/ba5f9eff-2ebb-414a-8211-3c2469af1afa

Veterans
To call yourself a veteran you must complete a Vasaloppet and/or Öppet Spår according to Vasaloppet’s rules for 30 years (only one race per year counts). After the 2018 Winter Week 1,023 veterans have skied 30 or more races. In Vasaloppet, veterans start in their own row in start group 5 (closest to the wall).

32 veterans have skied 50 races or more. Six veterans who have completed 49 races are registered for Vasaloppet 2019 to complete their 50th race!

Anne-Marie Richardsson, OK Landehof, skied her first race in 1979 (Öppet Spår). She is registered for Vasaloppet 2019 as the first woman to ever participate in their 40th race. In a row, to boot!

Celebrities
Some well-known people out on the course this Sunday, in alphabetical order:

Your length shortens during Vasaloppet. The discs in your spine compress and the arch of your foot flattens. During a Vasaloppet, the skiers shrink by a combined 220 metres.

Vasaloppet skiers produce so much energy that it could light 884,000 low-energy lamps (15 W) or about 2 million LED-lights.

Time penalty
If a participant is found to have littered in or along the Vasaloppet course (which is a nature reserve) then he or she will receive a time penalty of 15 minutes. Disposing of litter is permitted in three different ways: In the bins at the Vasaloppet checkpoints; In the marked littering zones between each Vasaloppet checkpoint; Where you as a participant know that a team leader or associate will pick up what you throw. For elite skiers Vasaloppet holds special dialogue, requiring that each team takes responsibility for, and picks up, any of their waste that is thrown along the track.

Sports Movement
Vasaloppet’s operations annually generate about 20–25 million SEK that goes back into the sports movement. About 50 percent goes to the owner clubs (IFK Mora and Sälens IF), about 30 percent is compensation to clubs who supply functionaries, and about 20 percent is in the form of fees to the Swedish Ski Association and Swedish Cycling Federation, which in turn is distributed to their sports clubs.

The Summer Week
Vasaloppet doesn’t just have a Winter Week. Since 2009 there’s also a Vasaloppet Summer Week with ten mountain bike and running races, such as Cykelvasan 90 and Ultravasan 90. See the complete list of races below.

Even more facts about Vasaloppet 2019 can be found in Vasaloppet’s 132-page Facts Guide, which can also be read online (in Swedish only):
VASALOPPET’S FACTS GUIDE 2019 >